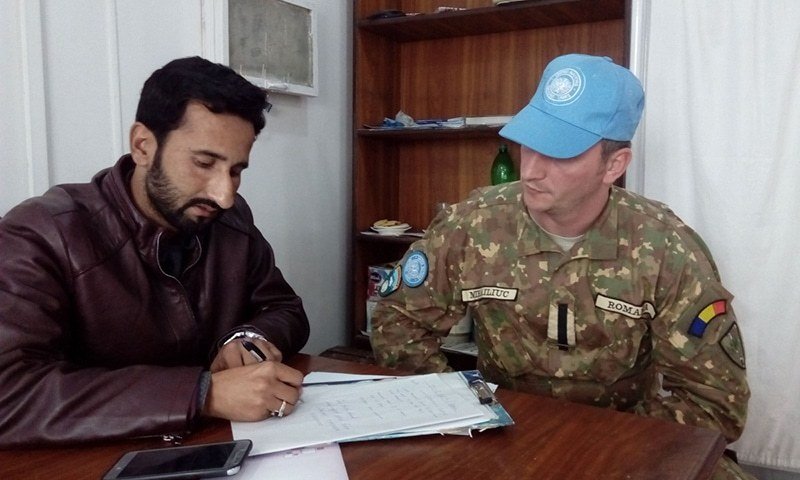 Three members of the United Nations Military Observers Mission for India and Pakistan (UNMOGIP) had a close call along the restive Line of Control (LoC) in Azad Jammu and Kashmir on Wednesday after Indian troops shot at and injured two locals who were briefing them on the situation prevailing in the wake of ceasefire violations, officials and residents said.

The incident occurred at noon in Abbaspur sector of Poonch district where the UN observers had reached in two white vehicles hoisting blue UN flags, Qazi Arslan, a police official in Abbaspur, told Dawn by phone.

“The UN observers were interacting with local people in Polas village when suddenly Indian troops resorted to burst firing from across the dividing line located hardly one kilometre away from there,” the official said.

“It was yet another incident of targeted firing which has become a hallmark of Indian troops manning the bloody dividing line,” said Chaudhry Saqib Mushtaq, a civil society activist in the area.

Arslan said the UN observers barely saved their lives and rushed to Abbaspur to inquire about the condition of the firing victims who had been evacuated to a health facility by other people.

As the news spread in Abbaspur, people took to streets to condemn the incident.

Some of the demonstrators took strong exception to the UN observers “abandoning the firing victims” instead of removing them to the health facility in their vehicles.

However, police official Arslan said the UN observers themselves were in a state of shock, as they did not expect firing from the Indian side in their presence.

He quoted them as saying that they had already passed a ‘hotline message’ to the Indian authorities regarding their visit to the LoC in this sector.

Arslan said as the injured persons were shifted to Shaikh Khalifa bin Zayed al Nahayan Hospital Rawalakot, the UN observers also left for the district headquarters of Poonch to record their statements.

The Inter-Services Public Relations (ISPR), the media affairs wing of the Pakistan Army, has yet to issue any statement on the incident.

Saira Yousuf, an Abbaspur-based journalist, appreciated the UN observers for rushing to the health facility in Abbaspur and then to Rawalakot to inquire about the health and record statements of the victims.

“They [UN officials] travel under a set protocol and we cannot and should not blame them. The remarks against them by some of the demonstrators were the outcome of some serious misunderstanding,” she told Dawn.

However, she added, as an institution the UN did come under scathing criticism for its “failure to address the root cause of the problem haunting the Kashmiris since a long time”.

Civil society activist Mushtaq said most of the demonstrators chanted anti-India slogans and called upon the UN and the government of Pakistan to “take urgent measures for their protection amid constant threat to their lives and properties at the hands of trigger-happy Indian soldiers.”

“There were unanimous calls that the UN Security Council session should be convened to discuss the situation along the LoC,” he said.

“This incident should also serve as an eye-opener for the UN because today they have seen for themselves how brazenly Indian troops target the civilians without any provocation,” he added.

The heavily militarised LoC has been witnessing ceasefire violations in a serious breach of the November 2003 truce agreement signed by the Pakistani and Indian armies particularly after September 2016, when an Indian army base in Uri was attacked by suspected militants, leaving 18 Indian soldiers dead.

Scores of civilians have either lost their lives or suffered serious injuries in frequent ceasefire violations in different parts of AJK.

However, of late Indian troops have resorted to deliberate targeting of civilians in AJK while they are doing daily chores in the vulnerable areas along the LoC.

The mission of UNMOGIP

According to the UN’s website, the first team of unarmed military observers, who eventually formed the nucleus of the UNMOGIP, had arrived in the mission area in January 1949 to supervise the ceasefire between India and Pakistan in the state of Jammu and Kashmir; and to assist the Military Adviser to the UN Commission for India and Pakistan (UNCIP).

Following renewed hostilities of 1971, the UNMOGIP has remained in the area to observe developments pertaining to the strict observance of the ceasefire of December 17, 1971 and report thereon to the Secretary-General, the site adds.

Monitoring of the LoC situation by the UN military observers has often upset India which has long been opposing their presence on both side of the divide.

New Delhi has argued that the UN had little role to play after India and Pakistan signed Simla agreement in 1972 under which the two countries agreed to resolve all disputes including Kashmir bilaterally.

However, Pakistan has frequently called for third-party involvement to settle the dispute in Kashmir.

In May 2017, two UN observers had a narrow escape in AJK’s southernmost Bhimber district, when their vehicle was allegedly targeted by Indian troops from across the LoC.