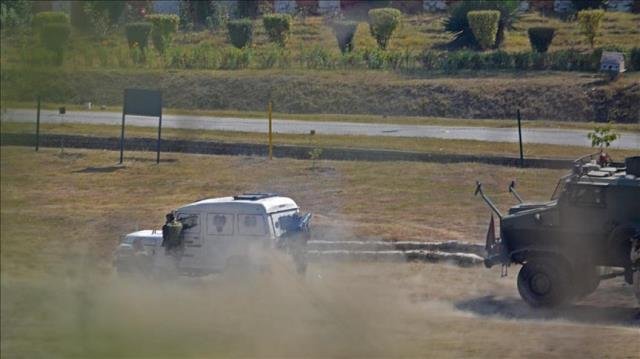 Five Indians soldiers and three militants were killed in a gunfight which ended Monday after militants stormed a paramilitary camp in the disputed Jammu Kashmir region.

According to Indian officials, three militants entered the 185 battalion paramilitary camp in the southern Pulwama district in the early hours of Sunday.

“Two militants were killed on Sunday. The third one has been killed today. His body has been recovered,” Rajesh Yadav, spokesperson of Indian Central Reserve Police Force in Kashmir, told Anadolu Agency on Monday.

The Lethpora camp is among the many training centers for paramilitary troops recruited for anti-militancy operations in the disputed region.

The two slain militants who were killed on Sunday are locals from southern Kashmir. According to reports one of them is a 16-year-old whose father is serving in the region’s police.

Analysts view the attack as the sign of a shift in the mindset of current militancy in the region.

Sunday’s attack was a rare Fidayeen (suicide) attack by local Kashmiri militants where they did not try to escape but rather took positions inside the camp.

“In the sense that they went into the camp and knew that they would be received by bullets, you could think of it as a suicide attack,” Yadav told Anadolu Agency. “Both of them however had only three or four months of training and it is unlikely that in such a short time they could be brainwashed into carrying out suicide attacks. But it can be a glimpse of how things are going to be.”

The government has suspended the Internet in southern Kashmir.

At least 170 militants have been killed by Indian forces in 2017, the most for a year in the last decade.

Also in Siachen glacier in northern Kashmir, Indian and Pakistani troops have fought intermittently since 1984. A cease-fire came into effect in 2003.

Kashmiri resistance groups in Jammu Kashmir have been fighting against Indian rule for independence, or for unification with neighboring Pakistan.

More than 70,000 people have reportedly been killed in the conflict since 1989. India maintains more than half a million troops in the disputed region.