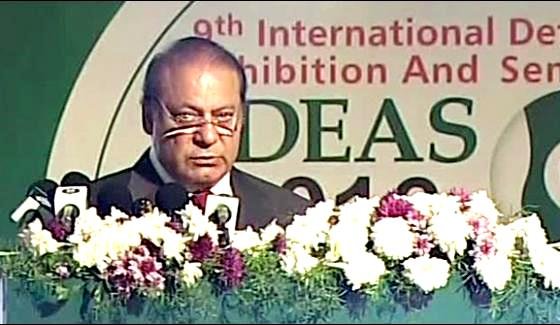 90 delegates from 43 countries and 418 companies from 34 countries are participating in four-day (Nov 22-25) long Defense Exhibition and Conference. Nine new countries are included among these this year including Luxembourg, Denmark, Belarus, Poland, Czech Republic, Switzerland, Belgium, Nigeria and Romania.

DEPO Director Media Commodore Tahir Javed told a news conference that overwhelming response from the companies from across the world has boosted our confidence and it proves the success of this mega event. A number of Defense Ministers, Armed Forces Chiefs and top officials are representing the foreign delegations.

Prime Minister Nawaz Sharif said that terrorism in Pakistan had declined significantly and the country had also improved as far as the energy sector was concerned.

“In Pakistan, the energy crisis has significantly diminished,” he said. “By the year 2016-2017, Pakistan’s GDP is expected to grow and reach the mark of 5 percent,” he added.

He told that several high-level meetings will also take place between the foreign delegations to promote cooperation in defence production.

International Defence Seminar is organised on the occasion. It will be presided by Mamnoon Hussain, President of Pakistan.

Indigenous AlKhaled Tank, JF 17 Thunder Fighter Aircraft are among Pakistan produces on display. The IDEAS 2016 will conclude on Nov 25.