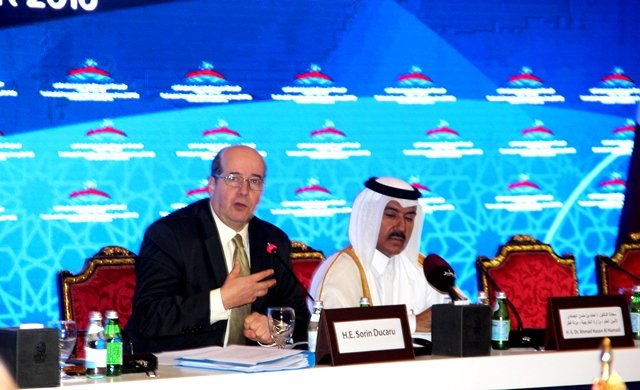 Third Meeting of the Consultative Group for the Istanbul Cooperation Initiative (ICI) was concluded today in Doha after coming up with a number of important proposals and ideas.

NATO and member states of ICI agreed on the necessity to strengthen relations to combat terrorism.

Dr. Ahmed bin Hassan Al Hammadi, Secretary-General of the Foreign Ministry, State of Qatar said in his closing speech that threats to global security and stability have become common between all members of the international community. This development required a joint, comprehensive effort in facing those threats while exchanging expertise and information on a regional and international level.

He said that that the partnership between members of the cooperation initiative and NATO has recorded a noticeable success in terms of achieving security in some countries.

Ambassador Sorin Ducaru, Assistant Secretary General for Emerging Security Challenges said that he sensed during the dialogue a desire for joint work.

Sorin Ducaru is also head of Qatar’s mission to EU and NATO reminded that Qatar has put in a huge effort to enhance cooperation between members and NATO ever since it joined the ICI in March 2005.

He noted that security threats and dangers face members of the international community collectively without exceptions, which requires joint work to face them. Efforts should include establishing cooperation mechanisms, exchanging expertise and information on a regional and international level.

Ambassador pointed out that the initiative had a clear role in strengthening ties with NATO, which was a big step towards guaranteeing stability and security in the region. Cooperation also helped improving security through training programs that aided the ability of member countries of facing security threats.

Sheikh Ali bin Jassim Al-Thani said that planning a future frame for cooperation between the ICI states and NATO that includes new forms requires exerting more efforts to enhance and achieve that end, noting that the collective partnership umbrella has become a necessity imposed by the current events at the regional and international arenas.

He added that the fields included in the agreement must be expanded by evaluating what has been achieved so far and whether it goes in line with the ambitions and interests of both sides. After that, the agreement would be expanded to feature new spheres of political and practical cooperation so as to overcome the negatives and create a new reality that takes the agreement forward and achieves results that helps in addressing current and future challenges.

The Qatari diplomat stressed the importance of boosting political dialogue among ICI states and NATO through semi-regular meetings at the ministerial level as well as at the level of the ambassadors of ICI states in Brussels with NATO ambassadors.

He said that dialogue and exchanging points of view in such meetings helps in increasing and promoting cooperation, which reflects positively on building trust among ICI states and NATO, and enhancing partnership to boost international security and peace.

Sheikh Ali bin Jassim Al-Thani highlighted the significance of specifying the mutual interests and practical objectives in order to achieve tangible results and address threats that jeopardize regional security, noting that this requires a united vision for ICI states towards the different regional issues, with that being an aspect of building a unified regional security strategy to achieve security for the Gulf region.

Sheikh Ali bin Jassim Al-Thani stressed on the need to find a proper mechanism for evaluating the extent to which ICI states benefit from the training courses that NATO carries out in the different fields and work to address the negatives if there were any. He noted that these trainings, whether practical or theoretical, constitute one of the basic pillars of cooperation between the two sides.

Qatar ambassador reaffirmed the importance of following up on the implementation of the recommendations of previous and future meetings and supporting ideas that help in developing the partnership between NATO and ICI states, while briefing ICI states on the security, regional, political, social and economic developments and founding training and practice ventures between the two sides in building defense and security capacities so as to show strength, opportunities and benefits of the partnership.

He highlighted the importance of coordination on a united strategy for public diplomacy by organizing regular meetings on important matters that require united stances and reactions.

Sheikh Ali bin Jassim Al-Thani said a new phase of cooperation started by approving the individual partnership program and cooperation between all the ICI states and NATO as well as the decision to accredit embassies of the ICI states in Brussels as missions to NATO, consequently accrediting their ambassadors as ambassadors to NATO.

The Qatari diplomat said bilateral cooperation is moving in the right direction but noted that more efforts needs to be exerted to promote mutual understanding and find joint approaches on challenges facing the two sides.