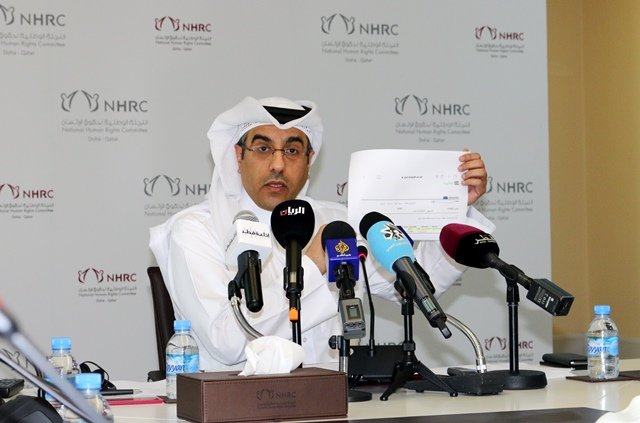 Qatar National Human Right Committee (NHRC) has asked Saudi Government to lift ban on Hajis from Qatar to travel by road.  ‘It is not possible for lower income people to pay high air fare to travel by air from Doha to perform Haj.  We ask the Saudi authorities to comply with international human rights conventions on freedom of movement and performing religious rituals.

Dr. Ali Samikh AlMarri, Chairman NHRC also asked to provide assurances for the safety, equal treatment and attitude towards Qatari nationals when travelling to Saudi Arabia, since poisonous propaganda against Qataris, and linking them with terrorism is endangering  to their safety.

He said that hardly ten or so days are left to enter for performing Haj, restrictions imposed on Hajis from Qatar by the Saudi authorities are still not lifted.

A total of 21,225 people from Qatar have applied to perform Haj this year so far, the quota allocated is only 2,400. Deadline to travel by air is 26 August and by road 21 August, but till date Saudis have not lifted the restrictions. If these restrictions including companies from giving accommodation, food and transportation in Saudi Arabia to Qataris, are not withdrawn the committee will keep seeking support of international human rights organisations to protect the religious rights of the citizens and to end exploitation of Haj for political goals, AlMarri said.

Addressing to the press conference today, he said that  NHRC had received many complaints from Haj operating companies that are facing hardships in running their business. The committee has urged Islamic scholars and related entities to persuade Saudi authorities to end the discrimination against pilgrims from Qatar.

He said that there are some positive moves from Saudi Officials whereby, Qatari students are being allowed to continue their studies in Saudi Arabia. Saudi authorities said it will allow their entry through border checkpoints but no details were given about implementing the decision, leaving it to whims of border officials.

On a question from media, he told that total number of complaints received by the committee from Qatari students affected by the siege are 201 students and majority of them were studying in the UAE (122 students) Saudi Arabia (52) and Bahrain (27).

Dr. Ali Marri told that UAE and Bahrain still depriving Qatari students of their rights whereas, majority among students from Qatar studying are in United Arab Emirates.

NHRC Chairman said that blocked GCC states have not allowed around 984 Qatari businessmen and owners of properties and livestock (Saudi Arabia 607, the UAE 331 and Bahrain 46) to look after their businesses and properties. He said that  violations to the rights of the Qatari investors and owners of properties by the siege countries and their deportation reflect that the investment environment in these countries are not secure. He stressed to respect in this regard local, GCC and international laws.

On a question from media, Dr. Ali Marri told that on human rights violations, a total of 3,269 complaints since the blocked was imposed on June 5th are registered. He said that the Committee  has also received complaints of 459 expat workers from India, Nepal, Bangladesh and other Asian countries, who are facing difficult living situation in Saudi Arabia and not allowed to enter Qatar with their Qatari employers. Al Marri told that their respective embassies are also involved to provide help, still response is awaited.

Dr. Ali Samikh AlMarri told that a number of  violations to the rights of people with disabilities to get treatment and in moving their necessary equipment are also recorded.

NHRC Chairman expressed his disappointment on the silence of Arabic League, Organization of Islamic Cooperation and GCC regarding the ongoing violations to the rights of Qatari and other GCC citizens. He told that these organizations were contacted and have been informed in writing, but still response is awaited.

20 January 2022 By Ashraf Siddiqui More than 7,000 books of different ...
END_OF_DOCUMENT_TOKEN_TO_BE_REPLACED