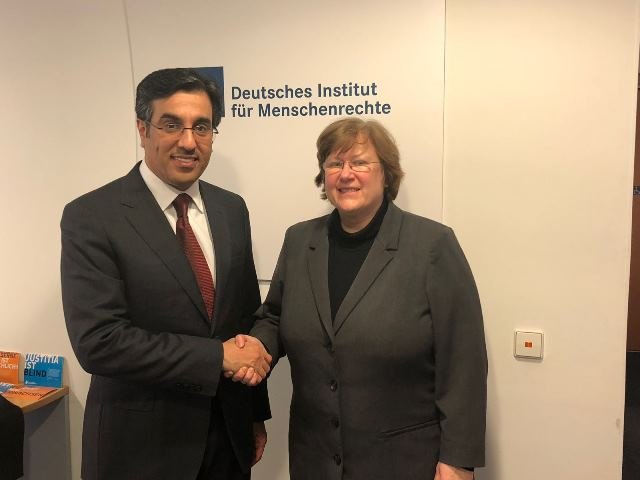 Dr. Rudolf, who is also Director General of the German Foundation for Human Rights in Germany, noted that she remains concerned that the conflict between Qatar and neighboring countries has a negative impact on human rights in the region.

During her meeting with Dr. Ali Bin Samikh Al Marri, Chairman, National Human Rights Committee Qatar in Berlin on Thursday, February 9, Dr. Beate Rudolph delivered an official letter of thanks to the efforts of the National Committee to monitor the violations of the embargo countries since the beginning of the crisis. In the credibility of the Committee, calling on them to continue their efforts.

“I write in my capacity as President of the Global Alliance of National Human Rights Institutions, which includes at the international level more than 110 national human rights institutions from all over the world, 78 of which have a grade” A “in the United Nations, indicating their compliance Of the Paris Principles of 1993.

I have followed the developments in the Gulf region since Saudi Arabia, the United Arab Emirates and Bahrain cut off their relations with the State of Qatar on 5 June 2017. I have received and reviewed reports published by the National Human Rights Committee from Qatar to document human rights violations in this case and their impact on The peoples of the region enjoy human rights “.

“The National Human Rights Commission is internationally recognized by the United Nations as the national human rights institution representing the State of Qatar, where it has been awarded a Class A after a thorough review of its full compliance with the principles of the United Nations in Paris. In order to re-establish accreditation in 2015, the degree of accreditation of the National Human Rights Commission has been confirmed by the Subcommittee on Accreditation. ”

She noted that the “general observations” of the Global Alliance of NHRIs, which made sense of the content and scope of the Paris Principles, stated that “in cases of coup d’état or emergency, the NHRI undertakes a high level of vigilance and independence, in full conformity with its mandate, The role of national human rights institutions ensures their respect, respect for democratic principles and the promotion of the rule of law in all circumstances and without exception, including conflict situations or emergencies, including monitoring, documenting and issuing regular and detailed public statements through the media at the time Appropriate to address violations of human rights “.

It stressed that “peace and security operations in no way nullify or diminish the relevant obligations of national human rights institutions”. In such circumstances, the protection of human rights becomes more important, and national institutions must ensure that individuals have access to available and effective remedies to address human rights violations. ”

“In line with its mandate to monitor the human rights situation in Qatar, the National Committee of Qatar has received an increasing number of complaints since the beginning of the crisis, monitored the situation and analyzed complaints, and published several results reports to document the impact of the crisis. I have taken note of these reports and remain concerned that the conflict between Qatar and its neighboring countries has a negative impact on human rights in the region.

“I also note that the National Human Rights Commission has repeatedly issued, in accordance with its mandate, recommendations to the State of Qatar, as well as other States concerned, international human rights bodies such as the Human Rights Council and the international community to take the necessary action and protect the human rights of peoples in The region and find a peaceful solution to the crisis. ”

“In view of the requirements laid down in the Paris Principles, as well as the general observations of the Global Alliance, and in view of the activities undertaken by the Committee since the beginning of the political crisis in the Gulf region, I encourage the National Human Rights Commission to continue to take appropriate action to address the consequences of the crisis in the area of human rights”, Dr Pieta Rodol concluded.

20 January 2022 By Ashraf Siddiqui More than 7,000 books of different ...
END_OF_DOCUMENT_TOKEN_TO_BE_REPLACED