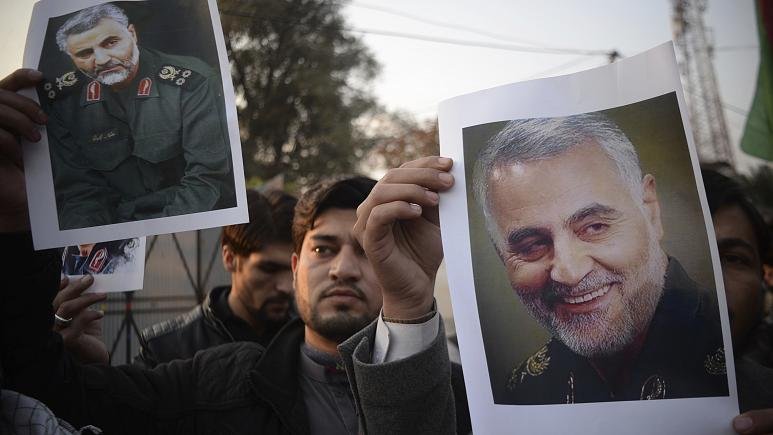 Leaders in the Middle East condemned the US attack, with Iraqi caretaker Prime Minister Adel Abdul Mahdi calling it an “aggression” on Iraq that would “spark a devastating war”.

“The assassination of an Iraqi military commander is an aggression on Iraq as a state, government and people,” Abdul Mahdi said in a statement.

“Carrying out physical liquidation operations against leading Iraqi figures or from a brotherly country on the Iraqi lands is a flagrant violation of Iraq’s sovereignty and a dangerous escalation that triggers a destructive war in Iraq, the region and the world,” Abdul Mahdi said. He added that the attack was a “flagrant violation of the conditions authorising the presence of US troops” on Iraqi soil.

Iran’s supreme leader Ayatollah Ali Khamenei warned the US of “harsh revenge” for the assassination.

Iranian Foreign Minister Javad Zarif condemned the killing as an “act of state terrorism”. “The pure blood of Qassem Soleimani will surely strengthen the tree of resistance, unite the Iranian people, and make US policies in the region less effective by the day,” he said in a statement.

Many analysts in Iran called the strike an ‘act of war’.

The attack took place amid tensions with the US after an Iran-backed militia and its supporters breached the US embassy in Baghdad. The protests at the embassy on New Year’s Eve was in response to a deadly US air attack that killed 25 forces of the PMF, also known as the Hashd al-Shaabi group.

“America – and the world – cannot afford to have tensions escalate to the point of no return,” she said in a statement. “The Administration has conducted tonight’s strikes in Iraq targeting high-level Iranian military officials and killing Iranian Quds Force Commander Qassem Soleimani without an Authorization for Use of Military Force (AUMF) against Iran. Further, this action was taken without the consultation of the Congress.”

Doha, 24 Sept. 2022 (QE) QatarEnergy announced that it has selected ...
END_OF_DOCUMENT_TOKEN_TO_BE_REPLACED