FATA Region Of Pakistan To Join Mainstream In 5 years, Gets: 10 Year Development Plan 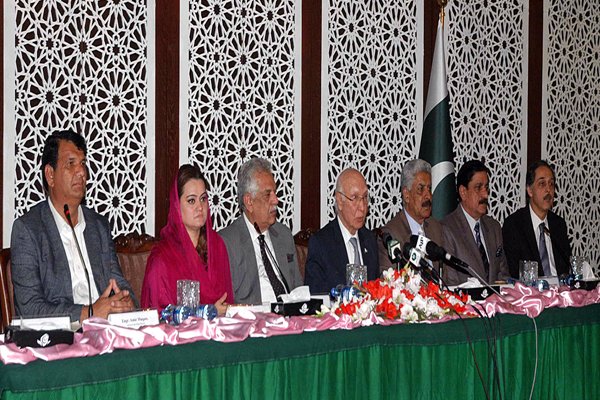 Pakistan announced today the gradual mainstreaming of Federally Administrated Tribal Areas (FATA) in 5 years while the area would be brought at par with the other areas of the country under 10 year special development package.

Sartaj Aziz, Chairman of the 6-member Committee on FATA Reforms & Advisor to the Prime Minister on Foreign Affairs, announced today on Thursday that the cabinet decisions on the recommendations of the Committee said provision would be made through constitutional amendment to enable the people of Tribal belt to elect their representatives to the Kheyber pakhtunkhwa Assembly in the 2018 election along with other consequential amendments.

He said the committee has suggested that party based local bodies elections should be held in FATA soon after 2018 general elections.

Sartaj Aziz said the cabinet had approved in principle to the recommendation of the committee to mainstream FATA in consultation with different stakeholders of the area.

He also elaborated the repeated consultation process which the committee adopted by visiting all agencies and holding Jirgas with the notables and representatives of all stakeholders of the respective areas.

He said the Frontier Crimes Regulatiuon (FCR) would be repealed and replaced by a new Rewaj Regulation for Tribal Areas which should be submitted to the president for approval under article 247 of the Constitution.

Provisions relating to collective/vicarious responsibility would be omitted, thereby making an individual responsible for his own acts.

The Temporarily Displaced Persons (TDPs) would be repatriated by April 30 whereas most activities under the reconstruction phase would be completed before the end of 2018, he said.

A high level experts special committee and officials would be formed under the governor Khyber Pakhtunkhwa to prioritize preparation of a 10 years’ socio-economic development plan for FATA by April 30.

The National Finance Commission would be requested to consider making an allocation of 3% of the gross federal divisible pool on annual basis for the implementation of FATA development plan. This would be in addition to the existing annual PSDP allocation of Rs 21 billion, Sartaj said.

The cabinet had also approved 30% of the allocation in FATA Development Plan which should be channeled through the local bodies. FATA Development Authority (FDA) would be reorganized under a Chief Operating Officer in BS 22 to supervise and coordinate the reconstruction phase and implementation of the 10 year Socio Economic Development Plan for FATA.

A governor’s Advisory Council consisting of all FATA senators and MNAs would be set up to assist the governor in carrying out development and administrative functions, Sartaj Aziz said.

The approving powers of FATA development committee, he said, would be enhanced through due process from the present Rs 400 million to Rs 2 billion and that of the FDWP from Rs 200 million to Rs 1 billion.

Permit/Rahdari system for exports from and imports into FATA would be abolished to eliminate large scale corruption and to bring down prices of essential items in FATA.

Correspondingly, necessary funds would be provided in the budget for operational expenditure of the political administration.

As per recommendations, auditor general of Pakistan was responsible for ensuring that development funds and all other expenditure of local bodies in FATA were properly audited to ensure judicious utilization.

Jurisdiction of Supreme Court of Pakistan and Peshawar High Court should be extended to FATA through an Act of Parliament so that the inhabitants of FATA could enjoy equal rights. However the people would have an option to go to the courts or Jirga, Sartaj Aziz said.

Explaining the Rewaj Act, he said it would function as western jury system as the judge would constitute a committee, comprising elders of the area for verification of facts and submit its recommendations to the judge, who would decide the matter.

This recommendation was also made as per aspirations and demand of the people of FATA, he informed.

Sartaj Aziz said additional posts in the Levies force may be sanctioned for performing agency/police functions in consultation with Finance Division.

Destroyed/damaged Levies posts should be reconstructed and provision of additional infrastructure for Levies to ensure round the clock security should be undertaken. Decision to create new wings in the civil, armed forces will be reviewed.

About the capacity building of FC, the committee recommended that it should be undertaken and additional new wings of FC may be created for improved border management.

It also recommended that all posts in FATA should be upgraded and brought at par with Khyber Pakhtunkhwa.

Salaries for the project personnel in FATA should be 20 % higher than that admissible under the project policy of Khyber Pakhtunkhwa.

FATA would also be connected to China Pakistan Economic Corridor at suitable locations and State Bank of Pakistan has been recommended to encourage establishment of more branches of banks in FATA.

It also suggested that land settlement should be planned and undertaken in consultation with the stakeholders by using modern technology to create GIS based computerized individual record of rights.

It also suggested that proper coverage of BISP, Bait ul Mal and micro-finance schemes in FATA should be ensured.

Quota of FATA students in education and health institutions in other province should be doubled and retained for 10 years after integration with Khyber Pakhtunkhwa, it recommended.

Sartaj Aziz said that a directorate of Transition and Reforms for coordinating and monitoring the reforms would also be set up as recommended in Chapter 5 of the Report.

Replying to a query, he said the KP government would be fully involved in the gradual integration of FATA into the province and executing the development plan.

To another question, he said the number of assembly seats of every province would be revised after completion of the census. The representation of FATA would also be increased as per their population, he added.

Governor KP, Zafar Iqbal Jhagra said that it was very significant achievement and it would change the map of the country besides redressing the outstanding demand of the people of tribal belt.

Minister for SAFRON, Abdul Qadir Baloch said that the people of the area despite being Pakistanis were deprived of the basic rights of citizenship and by bringing them into the mainstream, they would have equal rights.

Responding to a query he said the representatives of FATA would play advisory role in the development and utilization of the funds.

He said FATA is 10 times less developed than any other area of the country and needed special developmental efforts to bring it at par with other areas.