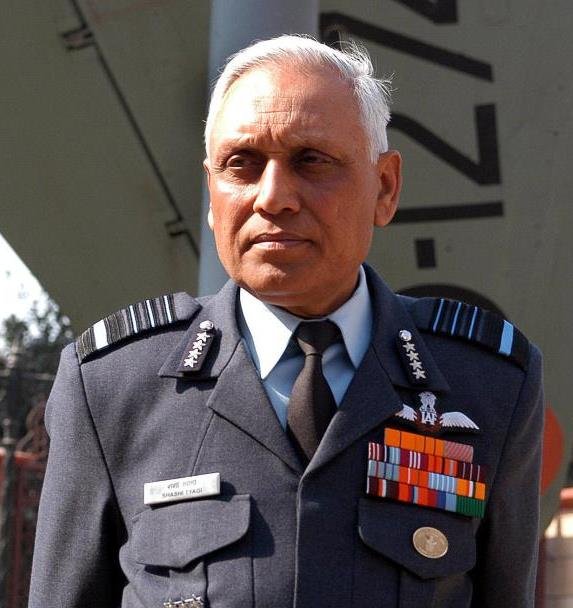 The premier investigating agency has alleged that bribes were routed through two channels involving a maze of companies in India and abroad.

Air Chief Marshal S.P. Tyagi (retd.) was arrested by the Central Bureau of Investigation on Friday, along with his cousin Sanjeev Tyagi and lawyer Gautam Khaitan, for alleged involvement in the Rs. 3,700-crore AgustaWestland VVIP helicopter deal case. Accused of routing the kickbacks, the lawyer was earlier arrested by the Enforcement Directorate.

The CBI has determined that about Rs. 450 crore, or 12 per cent of the Rs. 3,767-crore deal for procurement of 12 helicopters was paid as bribes. The government rescinded the contract in January 2014 in view of the bribery allegations.

A CBI spokesperson said, “Mr. Tyagi and the other two accused were summoned on Friday. They were arrested after about four hours of questioning at the agency headquarters.”

According to the official, “Mr. Tyagi allegedly entered into a conspiracy with other accused persons in 2005 and conceded to change the Air Force’s consistent stand that the 6,000-metre service ceiling of VVIP helicopters was an inescapable operational necessity. It was instead reduced to 4,500 metres. This helped AgustaWestland to meet the eligibility criteria for the contract. The kickbacks were received through middlemen and relatives.”

Claiming that he was innocent, Air Chief Marshal Tyagi had maintained that reducing the service ceiling was a collective decision involving senior officials of the Air Force, the Special Protection Group and other agencies. He was Chief of the Air Staff from December 31, 2004 to March 31, 2007.

The first charge sheet is expected to boost the agency’s request for extraditing alleged British middleman Christian Michel, who undertook about 300 trips to India between 1997 and 2013, from the UAE.

The CBI had, in March 2013, registered the case against the Air Chief Marshal and 12 others, including his three cousins Sanjeev, Sandeep and Rajiv Tyagi, Agusta Westland, its parent Italian company Finmeccanica and two Indian firms — IDS Infotech and Aeromatrix — for alleged receipt and payment of bribes.

The CBI says the bribes were routed through two channels using a maze of companies in India and abroad: one involving Mr. Michel and the other including Mr. Khaitan and two middlemen Guido Haschke and Carlo Gerosa. While Mr. Michel allegedly received 30 million Euros, the other middlemen got about 24 million Euros.

In 2014, the Enforcement Directorate registered a money laundering case against 21 companies and individuals, including the Air Chief Marshal, thereafter arresting Mr. Khaitan and attaching his assets for allegedly helping middlemen channelise funds through IDS Infotech-Chandigarh and Aeromatrix on the pretext of engineering contracts. The kickbacks were also laundered via companies in Tunisia, Mauritius and the United States.

The ED accuses Air Chief Marshal Tyagi’s cousins and their firms of receiving 1.05 million Euros from AgustaWestland-UK to help swing the deal in its favour. Their assets worth Rs. 6.2 crore were also attached under the Prevention of Money Laundering Act. The CBI had sent Letters Rogatory seeking information from Italy, Switzerland, Singapore, Mauritius, Tunisia, British Virgin Islands, the UAE and the U.K. Some countries are yet to share full details on suspicious transactions.

Shashindra Pal Tyagi served as the Chief of the Air Staff in the Indian Air Force from 2005 to 2007. The retired Air Chief Marshal had served in the Indo-Pak wars of 1965 and 1971.

He was commissioned in the IAF in 1963 in the fighter stream. He is a recipient of Param Vishist Seva Medal in 2003 and was appointed as one of the honorary Aide-de-Camps (ADC) of the President of India.

He has the distinction of being the only Air Chief Marshal to have done skydiving after being appointed to a high post as Chief of the Air Staff of Indian Air Force.