Erdogan: Turkey to Freeze Assets of US Justice and Interior Secretaries 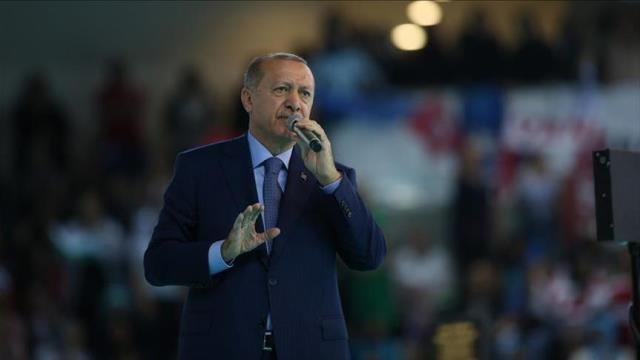 The Turkish president said Saturday they will freeze assets of the U.S. “justice and interior” secretaries in Turkey.

“I am instructing my friends today. We will freeze assets, if there are any, of the U.S. justice and interior secretaries in Turkey,” Recep Tayyip Erdogan said, speaking at ruling Justice and Development (AK) Party’s Women Branch congress in Ankara.

Speaking about the U.S. move to freeze assets of Turkish justice and interior ministers, he said: “This is not logic.”

Erdogan said the Turkish nation will not step back because of “threatening rhetoric and silly decisions” of sanctions.

“Especially the latest step by America regarding pastor Brunson issue in Izmir, is an ill-fitted step for a strategic partner,” he added.

Erdogan said: “Do not enter a swap deal with us by arresting the deputy general manager of Halkbank, who went to the U.S. and came back six times.”

Mehmet Hakan Atilla, former deputy CEO of Turkish state lender Halkbank, has been sentenced to 32 months in prison in the U.S. for violating the sanctions on Iran.

“Turkey cannot be an item of U.S. domestic politics like it became in Europe. Repeating the faults that Europe did, will not earn America anything,” Erdogan said.

He said they could solve problems with the U.S. by prioritizing their alliance based on mutual interests and strategic partnership.

“The channels of diplomacy are working very intensely. I think that we will leave behind a major chunk of differences between us soon,” he said, adding that they should sort out the issue rationally.

Erdogan warned that if these political and judicial disputes affect the economic dimensions, they will be harmful for both countries.