Erdogan: Issue Not About Myself, But Turkey, Islam 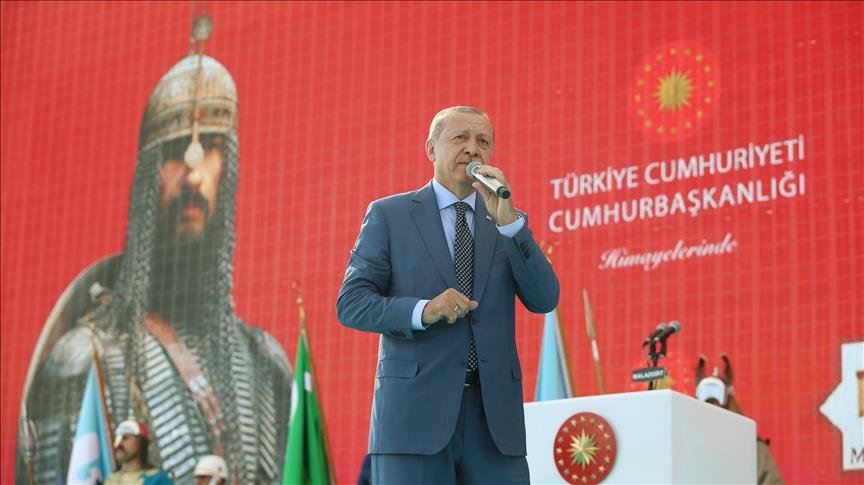 President Recep Tayyip Erdogan said on Sunday that the “issue” is not about himself and his party but “Turkey and Islam”.

Speaking in the eastern province of Mus at a ceremony marking the 947th anniversary of Battle of Malazgirt, Erdogan stressed that Turkey’s security is not limited to its borders, adding it starts wherever there is a brother under threat.

“Thus, we have to be powerful in politics, diplomacy, economy, trade and technology. Otherwise, put this homeland and geography aside, they won’t give us a single day to live in this world,” Erdogan said.

“If we show even a small sign of weakness, or perceive a situation in that way, you will see they will come onto us like hooded crows.”

Pointing at “some unwary people among us”, Erdogan said they assume the issue is about the president himself and the ruling Justice and Development (AK) Party.

Praising Turkish victory in Anatolia nearly a millennium ago, Erdogan said the Battle of Malazgirt (Manzikert) paved the way to Europe for the Turks.

The Battle of Malazgirt of Aug. 26, 1071 saw Seljuk Turks led by Sultan Alparslan defeat a Byzantine army and open up Anatolia for Turkish domination.

Describing Anatolia as a linchpin of the future of humanity, Erdogan said: “If Anatolia falls, neither the Middle East nor Africa, Central Asia, the Balkans, or the Caucasus will remain.”

The president also called on Turkish youth to take ownership of the country’s centuries-old legacy.

“Not only were we victorious in [the Battle] of Malazgirt, we also showed the entire world what a nation we are. The young people! Protect this legacy born in the past, moving forward into the future,” Erdogan said.

The president also said the spirit of Malazgirt is the key to the past, as well as the future, referring to Turkey’s 2023 objectives, in particular.

“Turkey carries the responsibility of a big civilization, a huge history and great humanity… I expect you, [the young people] to act likewise in whatever field you opt for,” Erdogan said.

Normalize ties with US

During his speech, Yildirim blasted those, who try to destroy Turkey’s unity, saying: “They will never be able to accomplish this.”

“In Turkey, economic coup attempts or coup attempts such as the one on July 15 carried out by traitors have never borne fruit, nor will they [in the future].”

Referring to the Washington administration, Yildirim called for exerting new efforts to normalize the relations.

“The inspiration for those who brutally fictionalize political and economic operations is driven by Byzantium’s provocation,” Bahceli said.

Political tensions between Ankara and Washington had sparked worries in markets early this month, after U.S. President Donald Trump threatened to use economic pressure over the detention of an American pastor who faces terrorism-related charges in Turkey.

The Turkish lira declined but staged a recovery recently, after positive messages from European capitals and Qatar’s decision to invest $15 billion in Turkey.