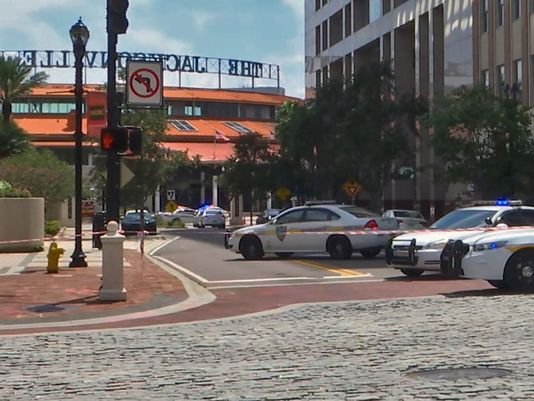 A number of people are killed and several injured today when a white man opened fire in an entertainment complex ‘The Jacksonville Landing’ along the St. Johns River. The area includes waterfront restaurants and an indoor shopping mall. The GLHF Game Bar – GLHF stands for good luck, have fun – bills itself online as “Jacksonville’s home for gamers and nerds alike.”

The shooting took place less than two days after a gunfire at a high school football game a few miles away, which left one person dead and two wounded.

Sheriff Mike Williams said the lone shooter, a white male, was among the dead. He declined to reveal the death toll.

The sheriff’s office said there were “multiple fatalities” and that many other victims were transported to hospitals. Multiple media outlets, including WJXT-TV, said four people were dead and several more wounded at the GLHF Game Bar.

Authorities had urged people hiding in the area to call 911 so police can get them out.

White House press secretary Sarah Sanders said President Donald Trump had been briefed and was monitoring the situation. Gov. Rick Scott said he had promised Mayor Lenny Curry and other officials in Jacksonville any state support they might need.

Jacksonville is about 300 miles north of Parkland, where a gunman killed 17 people in a rampage at Marjory Stoneman Douglas High School on Valentine’s Day. Sen. Bill Nelson issued a statement after Sunday’s shooting saying: “Word of another tragic mass shooting in our state brings shock and outrage.”