Duterte Arrives in Manama, Five Bilateral Agreements To Be Signed 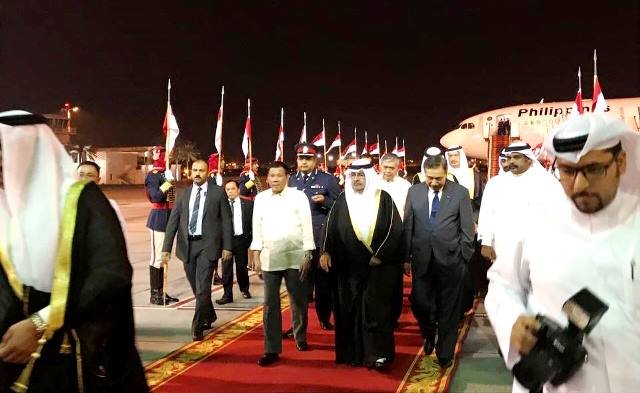 President Rodrigo Duterte of Philippines arrived from Saudi Arabia in Manama in the morning of Wednesday as his 2nd leg of official visit to Gulf States.

‘First is the establishment of the High Joint Commission, which will be the forum and the mechanism where the entire range of our relationships and other relationships between Bahrain and the Philippines will be discussed’.

Ver said since the establishment of relations between Bahrain and the Philippines in 1978, the two countries have been striving hard to elevate ties in terms of trade and investment, economic, and employment.

“This (trip) will also signal the renewal of our already close ties with Bahrain and hopefully establish even elevated to greater heights especially now as we would like to position the Philippines as Bahrain and the regions gateway to ASEAN and Asia. At the same time, Bahrain as a gateway for Philippines into Eastern province of Saudi Arabia, Saudi Arabia and the greater GCC (Gulf Cooperation Council),” he said.

He is also scheduled to meet with the Capital Club of Bahrain, a prestigious private business and social club composed of top CEOs and businessmen in Bahrain.

“They will listen to a presentation from our economic team on possible investments, mutual opportunities for economic exchanges, trade and investment, even tourism and the President will grace that event and hopefully meet also the eminent businessmen here in Bahrain,” said Ver.

The President will also meet with the Filipino community at the Khalifa Sports Stadium where thousands of overseas Filipino workers are expected to attend.

Ver said there are around 60,000 Filipinos working and living in Bahrain. He said while there are reported cases of abuses against Filipino workers here, the numbers remain low and most workers are treated very well.

Doha, 25 June 2022 THE Embassy of Nepal and the Non-Resident ...
END_OF_DOCUMENT_TOKEN_TO_BE_REPLACED