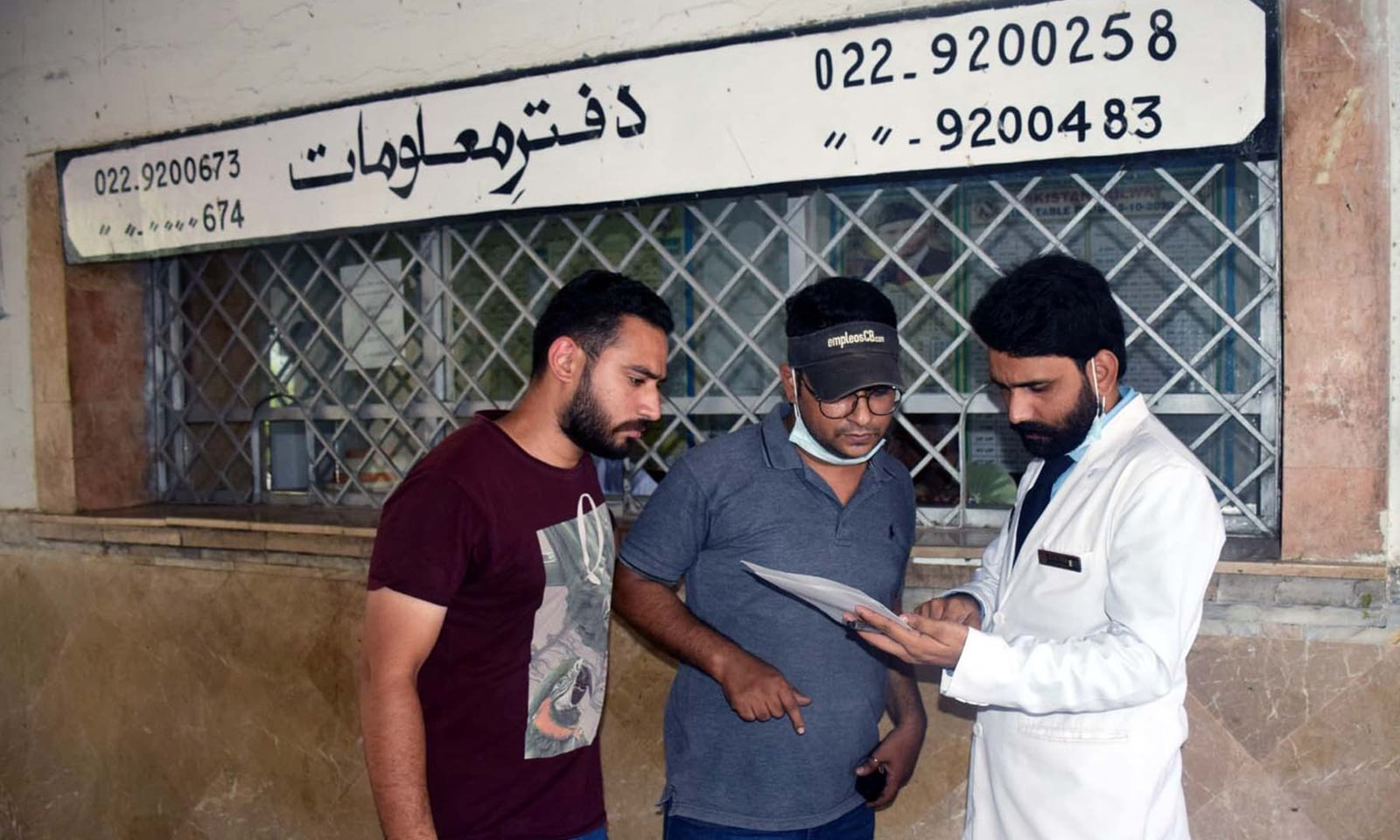 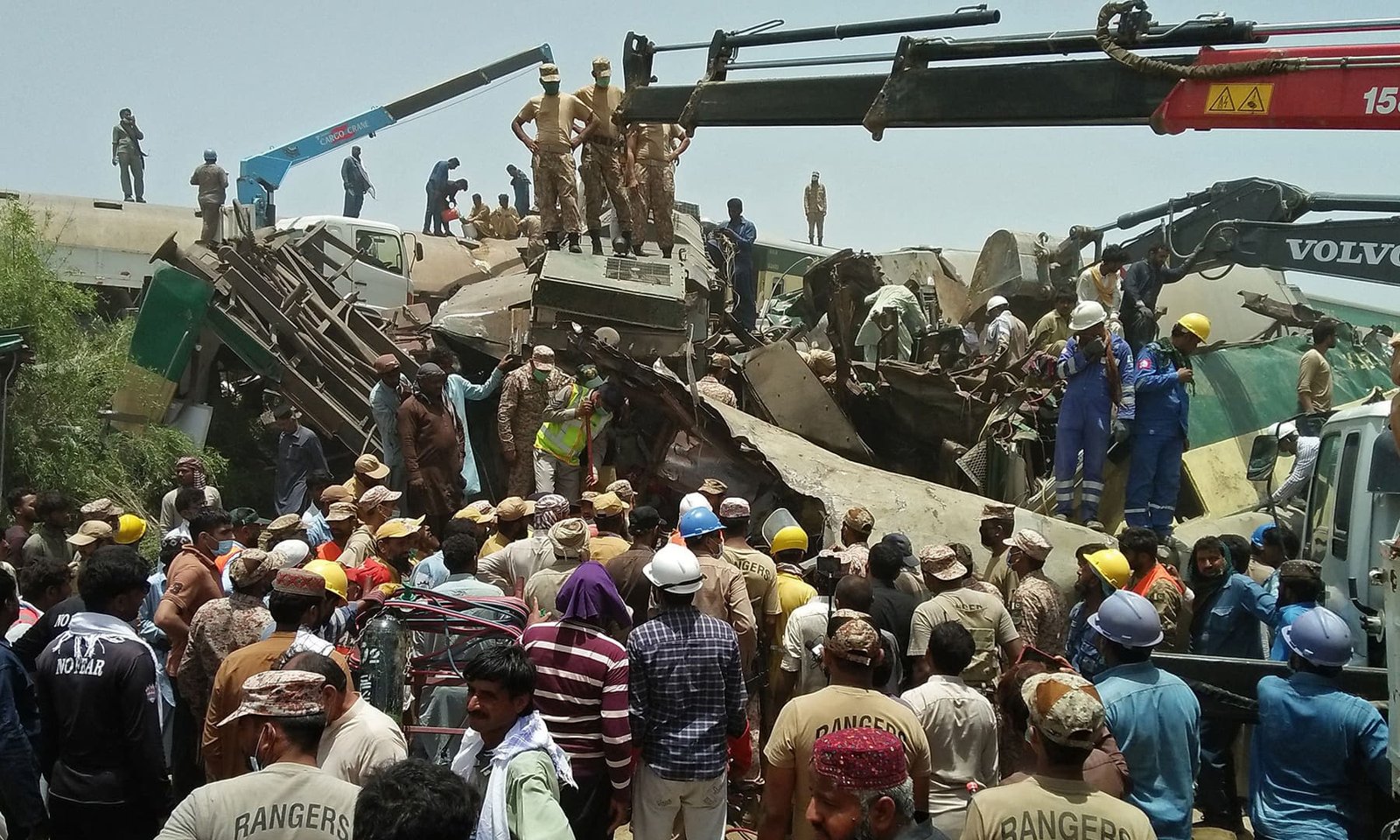 A train in Sindh’s Ghotki district smashed into derailed carriages of another train on Monday, killing at least 40 people, in the latest accident to highlight the perilous state of the country’s more than 165-year-old railway system.

Several people were still trapped in the mangled wreckage near Daharki, in a remote part of rural Sindh, which took rescue workers with specialist equipment hours to reach.

Rail accidents on the decrepit system are common. The network has seen decades of decline due to corruption, mismanagement and lack of investment.

More than 300 people were killed and 700 injured in 1990 when an overloaded 16-carriage inter-city train crashed into a stationary freight train near Sukkur.

More recently, at least 75 people died when a train caught fire while travelling from Karachi to Rawalpindi in October 2019.

Looking at the record of Pakistan Railways over the past five years, it seems that accidents have started happening more frequently since 2018. Here is a look at the major railways accidents during that period.

June 7, 2021: At least 32 people were killed and 64 injured after two express trains collided in Sindh’s Ghotki.

Feb 28, 2020: At least 19 people were killed when a train collided with a passenger bus near Sindh’s Rohri.

October 31, 2019: More than 70 people died in a fiery explosion on a moving train, which officials later blamed on a short-circuit fire. The incident occurred near Rahim Yar Khan, Punjab.

July 11, 2019: A Quetta-bound train collided with a cargo train near Sadiqabad in Punjab, killing 24 and injuring over a 100. The accident was later found to the result of a delay in the switching of train tracks.

June 20, 2019: Three people were killed when a passenger train collided with a stationary cargo train at Makli Shah, near Hyderabad.

December 18, 2018: 12 children were injured when a passenger train crashed into a school van near Narowal, Punjab. Eyewitnesses said the accident happened due to dense fog and because the gate at the crossing was left open.

September 27, 2018: A Peshawar-bound train had derailed in Sehwan, Sindh, due to which 11 bogies overturned.

March 28, 2017: At least two people were killed and 10 injured as Karachi-bound passenger train Shalimar Express collided with an oil tanker, leading to a huge explosion.

January 6, 2017: A motorcycle-rickshaw had collided with the Hazara Express, resulting in the deaths of eight people, including six schoolchildren and the driver in Lodhran.

January 22, 2017: A train had hit a car in Gojra, killing six people who were inside the car. The Shalimar Express had collided with the car, which was crossing the railway track at the time of the accident. The gate at the crossing was open at the time, which led to the accident.

September 15, 2016: At least six people were killed and over 150 injured when Karachi-bound Awam Express collided with a freight train near Multan.

July 2, 2015: At least 20 people died when three carriages of a special train fell into a canal and another passenger train derailed near Gujranwala.

November 17, 2015: Jaffar Express had gotten off tracks near a place called “Aab-e-Gum” in Balochistan. Around 20 people lost their lives in the accident.