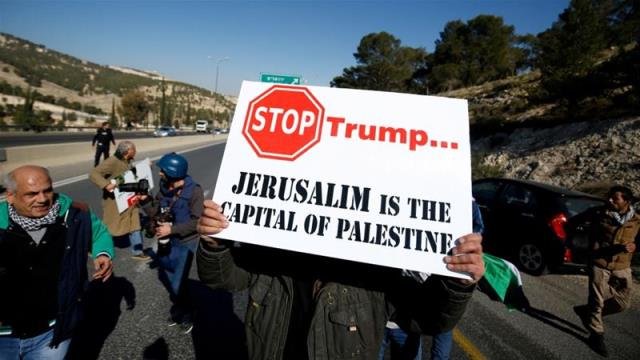 US President Donald Trump has signed a waiver to delay relocating the US embassy in Israel to Jerusalem from Tel Aviv, the White House says.

The decision avoids a controversial step that would have complicated his efforts to restart long-stalled Israeli-Palestinian talks.

“[Trump] has repeatedly stated his intention to move the embassy,” the White House said in a statement on Thursday.

“The question is not if that move happens, but only when.”

The White House said Trump “made this decision to maximise the chances of successfully negotiating a deal between Israel and the Palestinians”.

Trump, who pledged during the 2016 presidential campaign to move the embassy, chose instead to continue his predecessors’ policy of signing a six-month waiver overriding a 1995 law requiring that the embassy be transferred to Jerusalem.

Palestinians argue that moving the embassy from Tel Aviv would prejudge one of the most sensitive issues in the conflict – that status of Jerusalem – undermining US status as an effective mediator.

They hope to make East Jerusalem the capital of their future state, and have broad support from the international community.

“This is in line with the long-held US policy and the international consensus and it gives peace a chance,” Hussam Zomlot, Palestinian ambassador to the US, said in a statement.

“We are ready to start the consultation process with the US administration. We are serious and genuine about achieving a just and lasting peace.”

Foreign countries currently have their embassies in the Israeli commercial capital Tel Aviv because they do not recognise Israel’s unilateral claim of control over all of Jerusalem.

It claims all of Jerusalem as its united capital, while the Palestinians see the eastern half of the city as the capital of their future state.

The US has two consulate-general buildings in West Jerusalem.

One mainly deals with diplomacy with Palestinians, while another building issues visas to people who live in Jerusalem and Palestinians in the West Bank and Gaza.