‘ Cyprus is Our National Cause ‘ President Erdogan of Turkey 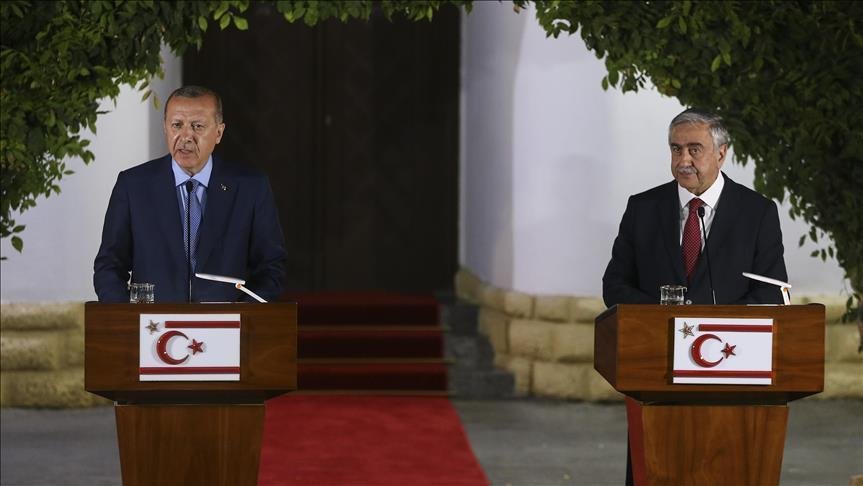 In a joint press conference with Turkish Republic of Northern Cyprus (TRNC) President Mustafa Akinci, on a visit to the TRNC, Erdogan said: “We will never allow the Turkish Cypriots to become minorities in a Greek Cypriot state.”

“Cyprus is our national cause. Our goal is to find a just and lasting solution on Cyprus,” he added.

Erdogan also said that Turkey aims to double the TRNC’s national income per capita by turning it into a center of attraction in the Eastern Mediterranean.

Erdogan’s trip to TRNC is his second state visit since his inauguration Monday to a second term, under Turkey’s new presidential system of government, continuing the tradition of Turkey’s leaders first visiting Azerbaijan and the TRNC after taking office.

Turkey officially switched to a new presidential system of government after Erdogan on Monday was sworn in as the Republic of Turkey’s first president under its new government system.

His June 24 re-election marked Turkey’s transition to an executive presidential system of government, doing away with the prime minister’s post, among other changes.

Erdogan won an absolute majority in the presidential election with 52.5 percent of the vote, according to Turkey’s Supreme Election Council (YSK).

For his part, Akinci praised the TRNC’s “sincere relations” with Turkey.

“The Turkish Republic of Northern Cyprus places great importance on its cooperation with Turkey. It is clear that Turkish Cypriots — unfairly isolated from the world — need Turkey’s support for the development of our country in every area,” he said.

Ruling out “open-ended negotiations” in Cyprus peace talks, Akinci said: “From now on, the Turkish side of Cyprus will not be a part of an unending negotiation process.”

In 2017 the latest attempt to reunify the long-divided Mediterranean island ended in failure after two years of negotiations.

Cyprus has been divided since 1974, when a Greek Cypriot coup was followed by violence against the island’s Turks and Ankara’s intervention as a guarantor power.

The UN has sought a peace deal to unite Cyprus under a federal umbrella that could also define the future of Europe’s relations with Turkey, a key player in the conflict.

The Greek Cypriot administration recently launched unilateral exploratory drilling activities for gas in the Eastern Mediterranean despite strong opposition from the Turkish Cypriot side, which argues that the island’s natural resources should be explored jointly to ensure equal rights of both peoples.