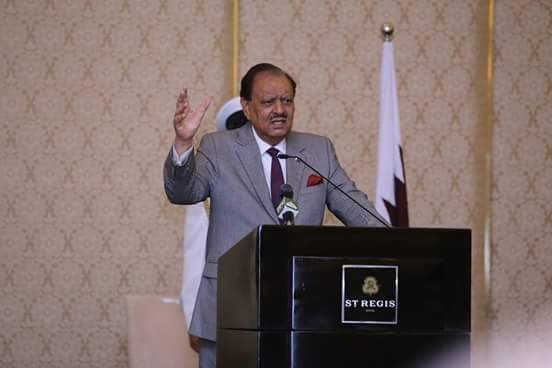 Mamnoon Hussain, President of Pakistan said CPEC program will boost economies of regional states and of Pakistan. He was addressing members of Pakistani community in Doha at the Hotel St. Regis. Pakistani President advised Pakistanis to be careful from propaganda campaign against CPEC which is equally beneficial to all areas of Pakistan. ‘ Pakistan is on right track and future of economy is very bright. It is economic development which strengthens the nations politically’ President of Pakistan said. He gave example of China 30 years back and of today. ‘ China focused on it’s economic development avoiding conflicts in the region and today china is second largest economy in the world’, Mamnoon Hussain said.

He advised his nationals to be careful from those who are creating disappointments and frustration in the society. He lauded the untiring efforts of present government and taking out the country from miserable internal security and from sad economic situations. ‘ We are grateful to State of Qatar for delivery of LNG which has helped in our economic development. ‘By end of 2018, Pakistan will have additional 10,000 MW of electricity in grids.

President of Pakistan said Pakistan had 6,700 Billion Pak Rupees domestic & Int’l loan in 2008, by 2013, it increased to 14,800 billion of Pakistani Rupees. Present government on taking over its power managed to clear US$ 10 billion against US$ 15 billion of total loans on Pakistan and today total domestic & int’l loan on Pakistan is only US$ 5 billion. Pakistan will get rid from this loan soon also, President Mamoun said.

President Mamnoon Hussain advised Pakistanis to discourage strongly corruption and may boycott such people, if they do not listen to you, boycott them’.

APP reports that earlier this morning, President Mamnoon Hussain visited Pakistan Education Center (PEC), a school being managed by Pakistan Embassy in Qatar, and interacted with the students. He inspected classrooms and school library. President Mamnoon Hussain had frank interaction with the students. He also signed a visitors’ book and recorded his expressions.

Earlier upon his arrival at the PEC, the President was received by Principal Nargis Raza Otha and staff members of the Education Center. He was presented a bouquet by two children clad with traditional Pakistani dress. Pakistan’s Ambassador to the State of Qatar, Shahzad Ahmad, also accompanied the President.

The President was highly appreciative of the standard and quality of education as well as other facilities in the Education Center.