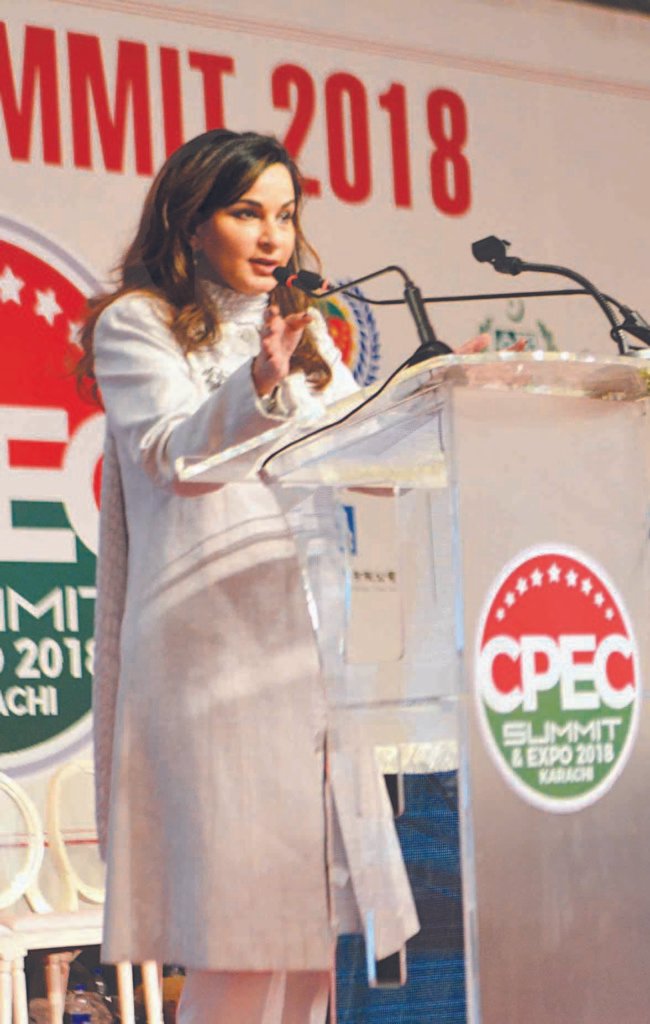 THE CPEC Summit 2018 was an important event with a distinguished group of thought leaders. In a conference full of unconventional wisdoms and cutting edge info, a lower‑riparian speaker’s job was quite unenviable. In more ways than one, the summit signalled Pakistan’s commitment to change and growth. What it signalled bang in the middle of election year was Pakistan’s agreement across the board on one thing: no one wants to be left out of this momentum.

The first thing that came to mind at a big‑ticket CPEC conference in Pakistan was that we are currently standing at a nodal pivot in Pakistan and China’s long‑established special relationship; but what also came to mind is that we are at an axial point where the world is rapidly turning in a re‑calibration of its priorities. Amidst the noise of dangerous new global conflicts that threaten the peace and prosperity of many nations, and fires that engulf entire regions, CPEC and BRI signal another engine moving relentlessly on, in entirely another direction of growth and peace. We can literally hear the wheels of a bold new order shift its shape under our feet.

We can also see the pulsation of the pointless regional neuralgia this partnership is giving some. My advice to them is that, they really shouldn’t worry, but instead join this enterprise.

It is truly the Asian Century. By linking the Atlantic to the Pacific through BRI, President Xi Jinping’s China is poised to redefine the global economic order as we know it, and change the way we think about the world. As the tracks for new global connectivity reframe human enterprise, with Gwadar as its launching pad, and Malacca not the only option, China becomes a two‑ocean power. This is both commercially relevant and strategically significant. As a key part of the constitution of the Peoples Republic, One Belt One Road (OBOR) has now cemented its place in the wheelworks of China’s long‑term vision of progress through economic partnerships. It is a projection of soft power unparalleled in the 21st century.

All this is relevant to Pakistan obviously in ways no other grand plan for exporting surplus was. Today, as we see China’s investments in Pakistan materialising through CPEC, I am clear that a major part of its success is powered by the groundwork and foundation PPP’s government provided.

Under [the then] President Zardari’s leadership, rooted in Zulfiqar Ali Bhutto’s revolutionary vision to share the Chinese Communist Party’s goals, and PM Benazir Bhutto’s brilliant championing of this joint vision, Pakistan’s relationship with China has gone into another dimension altogether. President Zardari’s vision was based on a grand idea for pivoting to the East at a time when the rest of the world was still busy calling on other capitals. This vision is shared and will be carried on forward by PPP under Chairman Bilawal Bhutto‑Zardari’s leadership.

PPP understood the grand Chinese dream well. Providing state support and strategic access to our warm waters was part of the vision. Therefore, we knew that Chinese development stewardship for Gwadar Port was pivotal to the CPEC becoming a reality.

CPEC has already created 60,000 jobs and Pakistanis would likely be able to make the most of these opportunities. We need trained manpower though.

Over the years, all of us have worked closely with Chinese officials and investors in facilitating projects, people‑to‑people relationships, cultural exchanges, and, most importantly, ensuring the security of everyone involved in CPEC projects. As we speak, 2,700 students from Pakistan were granted scholarships to study in China with thousands already learning Mandarin across the country. This kind of exchange is as important as big‑scale projects. Because building trust between peoples is what binds countries together in ties that sustain the tests of time, in all weathers and all storms.

As the first container ship sailed into Gwadar in March, CPEC has already started making an impact in all provinces. We have a long way to go in providing safe drinking water and schools to the people of Gwadar, but I am glad to see that social responsibility and signature projects are beginning to complement each other.

This must be something we work on together as early projects start harvesting into reality. Everywhere there is an industrial park or SEZ, a port or energy project, there should be a groundswell of children going to schools, functioning healthcare units and waste‑to‑ energy plants, which China is so good at doing at every level. The responsibility for this lies with Pakistan, and with the provinces too, but I urge our Chinese friends to double their interest and investment in social development as they are doing already in partnership with UNDP in Balochistan.

We are proud to say that the forward‑looking government of Sindh has also been leading the way in renewable energy projects. Sindh province contributes 930 megawatts of wind energy to the national grid with the help of CPEC projects. In line with this, the federal government should allow the use of renewable energy in Sindh.

As part of our history of joint cooperation, PPP looks forward to continuing to work closely with local and Chinese stakeholders in achieving our common goals and interests for the betterment of our people and the region. Two ports are now operating in their optimal capacities and other commercial ports, including the important Keti Bunder, are under development in partnership with the Chinese.

But CPEC is not a one‑party or one‑province ambition. It is a national project that goes beyond infrastructural development and we will stand by all efforts to create consensus and operationalise this grand ambition. Consensus‑building among political parties and provinces is crucial as the windfall from this venture can change the game for Pakistan.

Pakistan is not equivocal about its relationship with China. Right now, as we see promises turning into projects, the widespread public ownership of the ‘feel‑ good’ factor that China generates in Pakistan continues as do questions about equity transparency spread. With a multi‑billion dollar investment like CPEC, responsibilities and obligations for both Pakistan and China double. Transparency and equitability are the foundations for which an initiative with a scale as grand as CPEC must be built on.

As CPEC rolls out in Pakistan, there are three obvious areas to focus on: economy, environment and security.

It is undeniable that as an infrastructure and investment pipeline, CPEC has the potential of taking Pakistan into a quantum leap of prosperity and peace. It is believed that Chinese investment can stimulate a 15pc increase in Pakistan’s GDP by 2030 and would likely create over a million jobs across multiple sectors in Pakistan. While still in its very early stages, CPEC has already created 60,000 jobs and we hope that Pakistanis would be able to capitalise on this new job market. We need more Pakistanis trained to hold down these jobs.

However, development does not start and end at infrastructure and economic growth. We must also look into tech‑knowledge sharing and collaborations as we enter the Fourth Industrial Revolution. The development of regional value chains, a phenomenon that has entirely reshaped global trade in recent decades, is a particularly exciting prospect. Pakistan is well‑positioned to gain from this shift and CPEC is the perfect opportunity to bring advanced manufacturing and production practices to the country.

We have a responsibility to empower our youth and Pakistan can be a powerhouse of opportunities. Almost 60pc of Pakistan’s population is under the age of 30, making it the country’s most important demographic. To put that in context, three out of five Pakistanis are under the age of 30, full of hope and energy, but most without real employment prospects. Close to 60pc of them are currently in unstable or underpaying jobs and about 35pc are working in unpaid jobs. CPEC has given the millions of young people who enter the workforce every year a renewed hope. We have a joint task to find ways in which we can tap into the potential of Pakistan’s youth and expand their growth, and look at ways to accelerate youth employment and skill training. I look forward to working with the Chinese leadership on ensuring that more jobs and skills are created for Pakistanis.

As CPEC grows, Pakistan and China must look into a broader range of ventures and issues where we can cooperate and work on, one of which is environmental protection and climate change. Pakistan currently is the 7th most vulnerable country in the world to climate change. Pakistan’s carbon emissions are expected to double in two years and surge 14 times by 2050, which is way more than the global average. Given my travels in China, I know that the People’s Republic is no stranger to challenges brought about by climate change.

The enormous industrial investments and projects that will come with CPEC can be amplified if we prioritise creating a clean energy economy. I can only hope that we safeguard the future of the generations to come and that what we do today, in the name of progress, does not create new challenges for them. We hope that the Chinese government can bring to Pakistan the clean energy initiatives they have strictly enforced at home. We are old friends, and whom else can you ask for more, except from friends. Together, we must resolve to move towards eco‑friendly, sustainable and renewable energy sources.

Let me reiterate, if there is one thing that Pakistanis agree on, it is CPEC’s vision of human security, economic cooperation, reform and joint prosperity. As an economic bloc, South Asia will be one of the wealthiest regions in the world, with markets and growth vectors second only to China. At the same time, the region is also forecast for growing inequality, land hunger, poverty‑based migrations, water stress, and social deficits. These trends can be divisive in a region already crackling with tensions.

The CPEC Summit once again highlighted the Chinese government’s unfaltering cooperation, support and friendship to the people of Pakistan. The future really does lie in peace through economic partnerships. Let us hope our roadmaps take our young people into a brighter, energised, connected millennium.

The writer is Leader of the Opposition, Senate of Pakistan.