Ceasefire Between Rebels and Govt In Syria Agreed, Russian-Turkey Guarantees 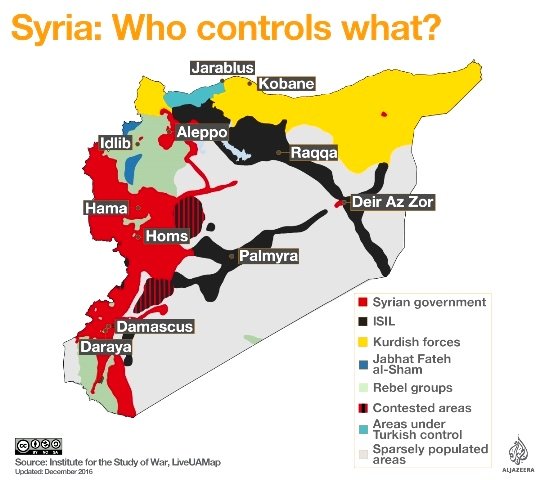 Russian President Vladimir Putin says an agreement has been reached on a countrywide ceasefire for Syria, with Russia and Turkey to act as guarantors.

He said the truce would begin at midnight on Thursday (22:00 GMT) and be followed by peace talks between Syrian President Bashar al-Assad’s government and the Syrian opposition in the Kazakh capital Astana.

“The agreements reached are, no doubt, very fragile and they demand special attention and follow-up in order to keep them and develop them. Nevertheless, this is a notable result of our joint work, efforts by the defence and foreign ministries, our partners in the regions,” Putin said.

“Now we need to do everything for these agreements to work, so that negotiators would come to Astana and would begin to work on real peace process. I call on the Syrian government, armed opposition, all countries involved to support these agreements.”

Putin’s announcement followed a statement carried by Syrian state news agency SANA, which said the agreement excluded the Islamic State of Iraq and the Levant (ISIL) group, Jabhat Fateh al-Sham, the group formerly known as al-Nusra Front, and “groups linked to them”, without specifying who these groups are.

Al Jazeera’s Hashem Ahelbarra, reporting from Gaziantep on the Turkish border with Syria, said excluding Jabhat Fateh al-Sham could “create some problems” and “futher undermine the ceasefire’s chances of holding”.

The group, he said, “has presence in areas where moderate rebel groups are operating – around Aleppo, Idlib and on the outskirts of Damascus”.

“If the Russians and the Syrian government decide to target the positions of Nusra [Jabhat Fateh al-Sham], the potential for casualties among other groups is going to be high”.

The Turkish foreign ministry confirmed the agreement and called on countries with influence on groups fighting in the country to provide the necessary support for the ceasefire to last.

“Russia and Turkey strongly support the truce and will monitor it together,” the ministry said.

“The first document lays out an agreement between the Syrian government and opposition groups on the ground. The second document includes measures designed to control the ceasefire and the third lays out what needs to happen next in order for there to be peace talks.”

Russia to ‘scale down’

Details of the agreement remained hazy, our correspondent said, and it was unclear which opposition groups had been involved in the negotiating process.

“Just a day ago the negotiating arm of the largest group of rebels fighting under the banner of the Free Syrian Army said they had yet to be in contact with anyone and had not been invited to participate in talks.”

In his announcement, Putin said the Russian military had been ordered to scale down its presence in Syria, where it has been providing crucial support to Assad’s forces.

He did not say how many troops and weapons would be withdrawn, but said Russia would continue “fighting international terrorism in Syria” and would maintain its presence at both an airbase in the coastal province of Latakia and the naval facility in the port of Tartus.

The Syrian conflict started as a largely unarmed uprising against Assad in March 2011, but quickly developed into a full-on armed civil war.

Staffan de Mistura, the UN special envoy to Syria, estimated in April that more than 400,000 Syrians had been killed since 2011.

Calculating a precise death toll is difficult, partially owing to the forced disappearances of tens of thousands of Syrians whose fates remain unknown.

Almost 11 million Syrians – half the country’s prewar population – have been displaced from their homes.