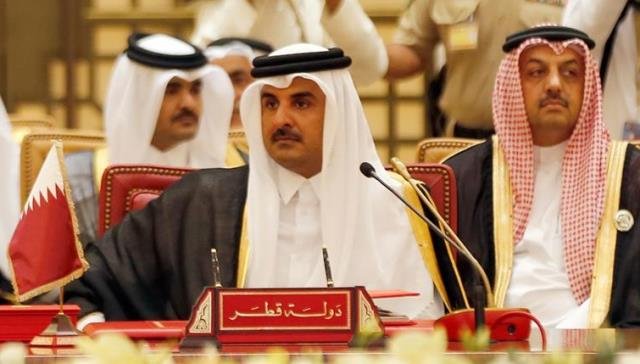 The emir of Qatar has said a group of Arab states blockading his country for almost five months is seeking “regime change”.

Speaking to US television programme 60 Minutes, Sheikh Tamim bin Hamad AThani said it was “obvious” that the Saudi-led quartet is trying to force a change of leadership in Qatar.

“History as well tells us, teaches us, they tried to do that before, in 1996 after my father became the emir,” he told host Charlie Rose in a wide-ranging interview that aired on Sunday.

Saudi Arabia, the United Arab Emirates, Egypt and Bahrain cut ties with Qatar on June 5 and imposed a land, sea and air embargo, accusing it of supporting “terrorism”. Doha denies the allegation.

“They don’t like our independence, the way how we are thinking, our vision for the region,” Sheikh Tamim told CBS’ 60 Minutes.

“We want freedom of speech for the people of the region and they’re not happy with that, and so they think that this is a threat to them.”

Sheikh Tamim became emir in 2013 at the age of 33, after his father, Sheikh Hamad bin Khalifa Al Thani, transferred power to him.

Sheikh Hamad had taken power in 1995, while his father was on an overseas trip. He survived a 1996 coup attempt and in the years that followed Qatar experienced rapid economic growth, helped by its vast natural gas reserves.

The months-long diplomatic dispute began about two weeks after a late May Arab-Islamic-American summit in Saudi Arabia’s capital, Riyadh, which was attended by US President Donald Trump and representatives of 55 Arab and Muslim-dominated countries.

Among them was both the Qatari Emir and the leaders of the countries that subsequently blockaded Qatar.

“It was a shock,” said Sheikh Tamim, referring to the blockade.

“A few weeks before that, we were meeting, all of us together, in one room, including President Trump,” he told CBS News’ 60 Minutes.

“We were discussing terrorism, financing terrorism, and nobody brought any concern from those countries. Nobody told me anything.”

When asked about the presence of  Taliban in Qatar, Sheikh Tamim said that they were asked and allowed to set up offices in the Qatari capital of Doha at the request of the United States.

“The reason why they came here, it’s not because we asked them to come,” he told 60 Minutes.

“America asked … They wanted to have dialogue so they asked us if we can host them here and have the dialogue. So we hosted them here, this is the reason why they’re here,” added Sheikh Tamim.

“When they [blockading countries] talk about terrorism, absolutely not. We do not support terrorism.”

Al Jazeera’s Mike Hanna, reporting from Washington, DC, said that this was the “first public statement from the emir since this crisis began back in June.

“He made it very clear his belief that the charges by the other Gulf states and Egypt are completely baseless … and rejected out of hand the claims by the boycotting states that Qatar is backing terrorism in any form,” added Hanna.

In the interview, the emir also said he is willing to attend US-hosted direct talks to put an end to the diplomatic crisis, but added that he has yet to hear a response to Trump’s offer to hold a meeting at his retreat in Camp David.

“We want it [the crisis] to end. But nothing is going to be above our dignity, our sovereignty,” Sheikh Tamim told 60 Minutes.

“But we want it to end, I always say that. If they are going to walk one metre towards me, I’m willing to walk 10,000 miles towards them.”

On June 22, the quartet issued a 13-point list of demands, including the shutdown of Qatar-based media network Al Jazeera, limiting ties with Iran and expelling Turkish troops stationed in the country as a prerequisite to lifting the blockade.

Doha rejected all the demands, denouncing them as attempts to infringe on Qatar’s sovereignty.

During the interview, the Qatari emir reiterated that the fate of Al Jazeera, which was launched in 1996, was not up for discussion.

“We’re not going to shut down Al Jazeera,” he said.

“Our sovereignty is a red line. We don’t accept anybody interfering with our sovereignty. When you tell me to close a channel like Al Jazeera, history will write one day in 50, 60 or 70 years how it changed the whole idea of free speech in the region.”

The 60 Minutes interview took place in Doha in early October, shortly after the emir’s return to the country after his first foreign trip since the start of the crisis.

In a major show of unity, thousands lined up the streets of Doha welcome back Sheikh Tamim following the trips to Europe and the United Nations General Assembly in New York, where he denounced the “unjust siege” imposed on Qatar.

When asked by Rose if he thought that the Saudi-led group had underestimated him, Sheikh Tamim replied: “I think they underestimated the Qatari people. I’m so proud of the people.”