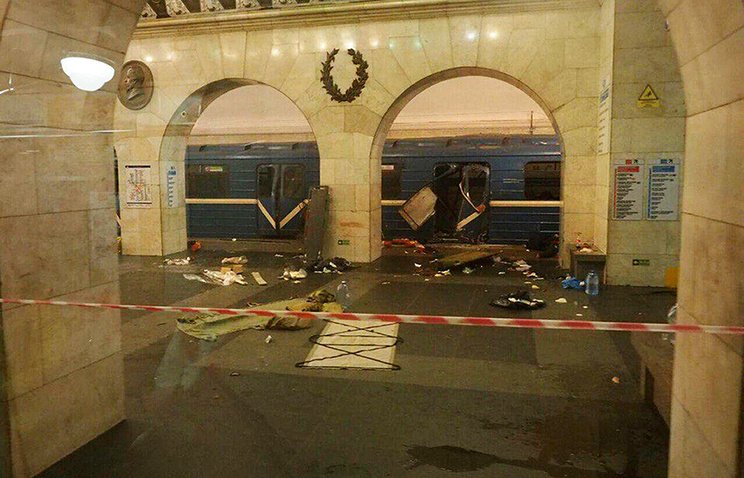 According to latest reports, ten people were killed by an explosion inside a metro train at the Sennaya Square station in St. Petersburg, emergency services told TASS. According to a source, an unidentified device exploded in a train car.

Evacuation of people from St. Petersburg’s metro after an explosion is now over, Andrei Przhezdomsky, a spokesman for the National Anti-terrorist Committee (NAC), told the Rossiya-24 television channel.

“So far, we say it was an unidentified explosive device as investigators and the Federal Security Service’s bomb specialists are to establish the exact cause of this explosion. Evacuation is over, medical assistance is offered to those hurt,” he said.

However, later Russia’s Investigative Committee has qualified the explosion on a St. Petersburg metro train as a terrorist attack. At the same time, the investigators are not excluding other versions, apart from terrorism, the IC spokeswoman Svetlana Petrenko has told TASS.

“The criminal case was opened under Article 205 of the Criminal Code [Act of Terrorism], but the investigators are going to proceed along other lines of inquiry, too,” she said.

The investigators were now looking into all circumstances of the explosion. IC chief Aleksandr Bastrykin has commissioned the IC’s special investigations department to probe into the affair.

“According to preliminary findings, a yet-to-be specified explosive device went off on a train between the Tekhnologichesky Institut and Sennaya Ploshchad stations at 14:40 Moscow time. There were casualties. A team of experienced investigators and forensic specialists from the IC’s head office has been dispatched to St. Petersburg,” Petrenko said.

The specialists are going ahead with crime scene investigation. All pieces of important material evidence are being collected, witnesses and metro employees questioned and the number of casualties is being specified.
Preliminary findings indicate that the train driver’s actions were correct.

“The explosion occurred between two stations. The driver made the right decision not to stop the train but take it to the next station, which allowed for promptly starting the evacuation and providing assistance to the injured. This helped prevent a heavier death toll,” Petrenko said.

In light of the St. Petersburg metro blast, transport security measures have been tightened in Moscow as well.

Moscow mayor Sergei Sobyanin conveyed his condolences to the families and friends of those killed.