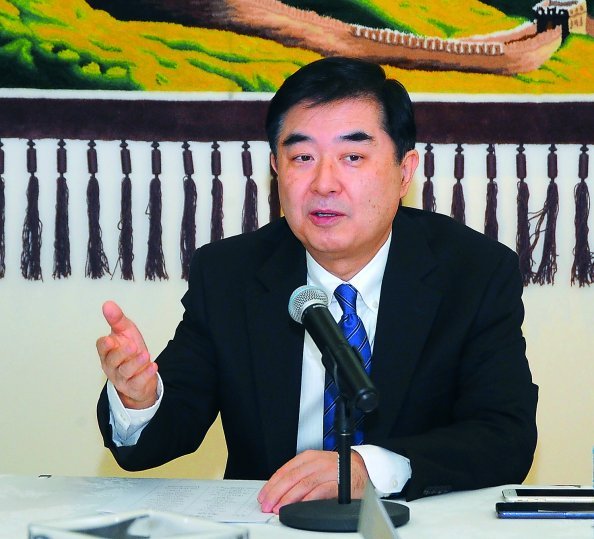 Li Chen, Ambassador of the People’s Republic of  China said on Wednesday that the visit of Amir of State of Qatar to Beijing, which begins today, will play a key role in enriching the strategic bilateral ties and will enhance bilateral cooperation in all fields.

He said that there is a strong will from the leadership of both sides to enhance strategic ties, expressing confidence that the visit of Amir of Qatar will enhance bilateral cooperation. The two sides will hold talks to enhance their strategic partnership and cooperation in all fields. They will also discuss a number of regional and international issues of joint interest, in addition to signing a number of agreements on the sidelines of the Qatari-Chinese Business Forum.

Chinese envoy to Qatar highlighted the historic ties between the two countries, saying they just celebrated 30 years on establishing diplomatic ties. He added that friendship between the Chinese and Qatari peoples extend for more than a thousand years.

He said that the establishment of diplomatic relations between the two countries back in 1988 paved the way for the beginning of a new era of relations between them and the two peoples in terms of equality, mutual respect, understanding, mutual support and sincere cooperation. He added that over the past 30 years, under the patronage and support of the two leaders at various stages, the friendly relations between China and Qatar have witnessed continuous and rapid development. He noted that the two countries support of one another on fundamental issues increases mutual political trust.

Ambassador Li Chen added that, at the level of international cooperation, China and Qatar are keen to coordinate, cooperate and work to maintain peace and stability at the regional and international levels. He also said that the two sides also defend the common interests of developing countries and strive to build a human society in which peace, security and development prevail. He noted that the two countries will announce the establishment of the China-Qatar Friendship Association and the Qatar-China Friendship Association, which the ambassador deemed an important step in the two sides’ efforts to strengthen the friendship and cooperation between the two friendly countries.

He said that China-Qatar cooperation has made great strides over the past 30 years. The volume of trade exchange between the two countries increased from $50 million at the beginning of the establishment of diplomatic ties to $10.3 billion in 2017, growing about 200 times. China is Qatar’s third largest trading partner and second largest source of imports, while Qatar is the second largest exporter of LNG to China.

He pointed to the presence of about 200 Chinese and joint Qatari-Chinese companies in Qatar. They work in a wide range of sectors such as engineering, contracting, information technology, trade and services, and some of them participated and participate in vital projects within the framework of Qatar National Vision 2030 and the World Cup 2022 projects. Qatari companies for their part also operate in the Chinese market.

In the financial and investment fields, the two sides signed a 35-billion-yuan currency exchange agreement in 2014 and renewed it in 2017. In 2015, the first Renminbi clearing house in the Middle East and North Africa region was established in Qatar to serve trade and investment exchanges between the two countries. Both the Industrial and Commercial Bank of China and the Bank of China have opened branches in Doha, while Qatar National Bank and Doha Bank have opened offices in China. Investment cooperation is one of the most promising areas of China-Qatar cooperation, HE the ambassador said.

He pointed out that Qatar is one of the first countries to support and express its desire to participate in the Belt and Road initiative. He noted also that it is a founding member of the Asian Investment Bank for Infrastructure, which was established in this framework at the invitation of China.

The Chinese Ambassador talked about the bilateral relations in the field of culture, tourism and sports. He said that the Chinese-Qatari year of culture, which was organized in 2016 and included a series of artistic performances, exhibitions and festivals, achieved great success and gave impetus to the cultural and humanitarian communication between the two countries.

On tourism between both the countries, he said that Qatar Airways operates 49 direct flights every week to seven Chinese cities: Beijing, Shanghai, Guangzhou, Hangzhou, Chengdu, Chongqing and Hong Kong, while Qatar’s National Tourism Council opened three representative offices in Beijing, Shanghai and Guangzhou. He told that the number of Chinese tourists visiting Qatar in 2017 was about 45 thousand tourists, up 26 percent compared to 2016. The number in 2018 exceeded 62 thousand, a 38 percent increase.

He said that there was significant progress made in recent years in the field of education, especially in terms of exchanges of professors and students.

In the sports sector, the two countries have maintained good cooperation, with Qatar supporting China to host the Winter Olympics in 2022 while Beijing supported Qatar as the first Arab country to host the 2022 FIFA World Cup, adding that the two countries can share experiences in organizing major sporting events.

On cooperation in field of counter-terrorism, Chinese envoy  praised Qatar’s active role in the fight against terrorism and its cooperation in this regard with the relevant United Nations organizations, pointing out that China and Qatar signed in 2017 a cooperation agreement in the field of security and law enforcement.

20 January 2022 By Ashraf Siddiqui More than 7,000 books of different ...
END_OF_DOCUMENT_TOKEN_TO_BE_REPLACED