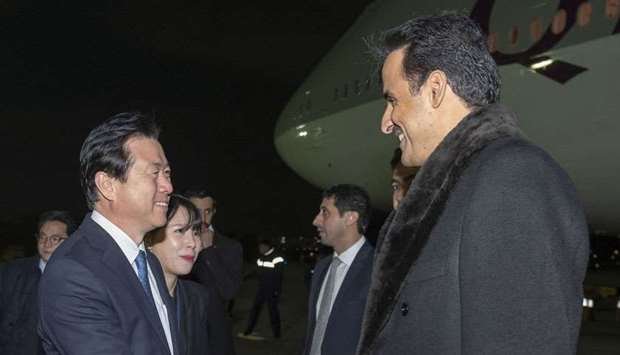 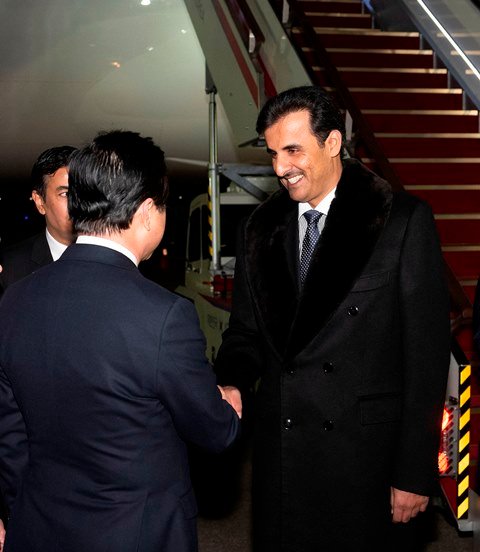 In its editorial published on Sunday, Al-Watan stressed that the State of Qatar sets a distinguished model of political, economic and diplomatic action in a well-considered way based on a clear strategic vision which has always earned Qatar respect and admiration in all regional and international forums.

In a short period of time, Qatar has achieved remarkable development and successes in its knowledge-based economy and in the use of the best technology in various fields, keeping abreast of the rapid scientific development in today’s world, the paper underlined.

Amir of Qatar’s Asian tour is attracting attention due to Qatar’s significant economic, political and diplomatic standing both regionally and internationally, and due its keenness on establishing successful economic partnerships, the Qatari daily said. It also reflects Qatar’s desire to open markets and strengthen mutual trade growth with East Asia in an effort to promote economic partnership with Asian giants in the economic arena, the paper added.

In conclusion, Al-Watan said that economic figures and statistics affirm that Qatar is at the forefront of countries that commit to international initiatives that are based on promoting peace and security, achieving sustainable economic and social development, defending fair issues, entering into successful economic partnerships and strengthening economic cooperation with various countries and international groups to achieve common economic benefits.

Arabic daily ‘Al-Arab’ said that Amir Sheikh Tamim bin Hamad Al-Thani starts today a new foreign trip as part of his continuous efforts to enhance and strengthen Qatar’s relationships with various countries of the world, noting that the tour includes three of the world’s major countries in the technological development and economic growth, which are South Korea, Japan and China.

The paper added that the Asian trip is the twelfth Amir’s foreign tours and visits after the blockade, the last of which was in December when he visited Malaysia,  that gained a special significance as it came following the election of Prime Minister Mahathir Bin Mohamad.

Prior to that visit, Amir of Qatar has met with Turkish President Recep Tayyip Erdogan in Istanbul in November followed by Amir’s European tour to Croatia and Italy. Earlier, Amir of Qatar visited Latin American states of Ecuador, Peru, Paraguay and Argentina, the paper added.

He has also paid an important visit to Germany in September, and a visit to France in July. In March, the Amir paid visited Belgium and Bulgaria, Al-Arab said.

Amir of Qatar  also took part in Munich Security Conference in February, and toured six African countries and a number of Asian countries, it noted.

Daily Al-Arab underlined that Amir’s tours and visits come in the framework of a studied strategic orientation, through which Amir was able to expand the country’s political relations and economic investments in various world continents and friendly countries, for the interest of Qatar National Vision 2030.

Today, after 600 days of the unjust blockade, the relationships of the State of Qatar with world have grown stronger and closer, while those countries which imposed the blockade have plunged into a quagmire of endless political and economic losses, Al-Arab concluded.

The paper added that the Asian tour of the Amir gains great importance in light of the unjust blockade imposed on Qatar and carries clear indications that Qatar’s foreign relations were not affected by the blockade.

Through this tour, Qatar is seeking to upgrade its relations with the three countries from bilateral cooperation to strategic partnership in various fields by signing joint agreements and memorandums of understanding. Amir’s tour opens new horizons for establishing political, economic and commercial partnerships, and sends a clear message to the blockading countries that they have failed to isolate Qatar from its regional and international environment, Al-Raya said.

Al-Raya stressed the keenness of the wise leadership on strengthening and developing Qatar’s relations with all sisterly and friendly countries, in addition to exerting maximum efforts and harnessing all capacities to build modern Qatar and enhance its development.

The Qatari daily also noted that Qatar is keen on its distinguished relations with South Korea which have been developing for more than four decades. Amir’s visit and his talks with the Korean leadership will affirm the common desire to consolidate the bilateral relations, promote the mutual cooperation and the strategic partnership and strengthen the friendship between the two countries.