Amir of Qatar Arrived in Tokyo, ‘A Precious Opportunity to Both States to Strengthen Bilateral Relations’, Japanese Envoy 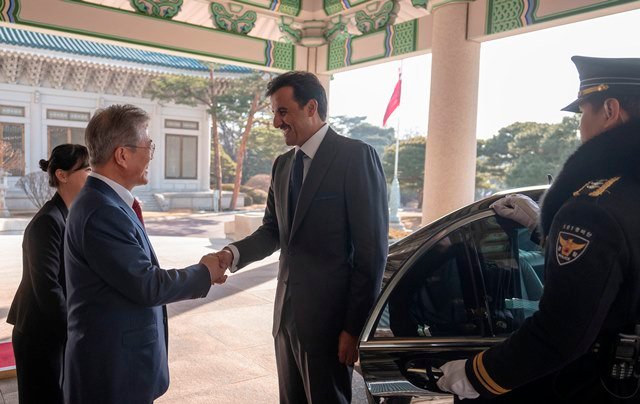 Amir of State of Qatar, Sheikh Tamim bin Hamad Al-Thani arrived Monday in Tokyo on an official visit to Japan, Qatar News Agency reported a while ago.

Norikazu Suzuki, Vice Minister for Ministry of Foreign Affairs of Japan received Amir of Qatar and accompanying members of delegation on arrival at Tokyo International Airport (Haneda) . Present on the occasion were Tadahiko Ito, Secretary General of Japan-Qatar Friendship Association,   Hassan bin Mohammed Rafi Al Emadi, Ambassador of Qatar to Japan, Seiichi Otsuka, Ambassador of Japan to State of Qatar, a number of Arab Ambassadors accredited to Japan and members of Qatari embassy in Tokyo.

This morning of Monday in Seoul, Amir of Qatar Sheikh Tamim bin Hamad Al Thani and President of the Republic of Korea Moon Jae-in held a session of official talks  at the Presidential Palace (the Blue House) in the Capital Seoul.  Moon Jae-in, in his welcoming address expressed his pleasure to meet Amir of Qatar and the accompanying delegation, looking forward to the positive outcomes of the visit, especially as it coincides with the 45th anniversary of the establishment of diplomatic relations between the two countries. Korean Republic President also expressed hope to develop and promote these relations at the international level.

In his statement at the beginning of the talks, Korean President extended his congratulations to Amir of Qatar on the victory of the Qatari national team over the Korean team in the Asian Cup, wishing the Qatari team success at the Qatar World Cup 2022.

Earlier, in an interview with Qatar News agency, Seiichi Otsuka, Ambassador of Japan to State of Qatar said that visit to Japan by Amir of Qatar Sheikh Tamim bin Hamad Al-Thani’s is a precious opportunity for both countries to strengthen bilateral cooperation and hold talks that will develop the joint cooperation between the two sides.

He said that Amir of Qatar’s visit to Japan enables the first high level meeting of the two countries after the blockade. He added, “We are looking forward to holding substantial discussions. This is a precious opportunity for both of us to advance the bilateral cooperative relations.”

Forthcoming discussions will cover ways and means to promote the bilateral cooperative relationship, as well as to exchange views on the regional and international situations, Ambassador said.

He said that talks between the Qatari and Japanese sides will include exchange of views and policies, in particular, on how to make the MENA region stabilized.

The economic and commercial circle of Japan will expect a growth of their activities in the State of Qatar, the Ambassador added.

Qatar’s decision on building additional LNG production capacity by 33 million tons last year is the key decision to not only domestic economic development but also substantial supply to the international gas market, he said. Japan considers it critical and a key project for both countries, he added.

Otsuka said that the Japanese side wishes to diversify the cooperation field between the two countries. Knowledge based industries and economy will be able to be introduced under new investment circumstance in Qatar where more foreign investors can be attracted.

He said that the approach for forming joint venture between the two sides can provide an opportunity to make smooth transfer of technology to the indigenous companies, noting in this regards that the recent enactment of new law on non- Qatari investment is noteworthy.

Japanese ambassador said that Qatari active diplomacy and its exposure to the Japanese public will bring about more attention and interest of Japanese private sector people toward the future potential of the Qatari market, it will enhance the existing economic and trade ties.

Japanese ambassador said that during this visit of Amir of Qatar to Japan, in addition to establishing of bilateral strategic dialogues between both countries, a  number of MOUs will be signed  in areas of environment, transport, economic, commercial, technical cooperation and culture.