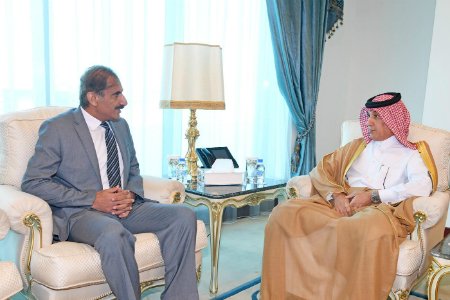 Sultan bin Saad Al Muraikhi, Minister of State for Foreign Affairs, State of Qatar  received on Sunday copies of the credentials of Syed Ahsan Raza Shah, Ambassador of the Islamic Republic of Pakistan to the State of Qatar.

The Minister of State for Foreign Affairs wished the ambassador success in his mission, stressing that he would receive all support to promote bilateral relations between the two friendly countries to closer cooperation in all fields.

A number of the Foreign Ministry officials attended the ceremony.

Imran Khan, Pakistan’s Prime Minister is scheduled to visit State of Qatar on 22nd of January 2019. As per Pakistani media reports, he will be meeting Leadership of Qatar. He is aexpected to be accompanied with Minister of Foreign Affairs, Minister of Finance and Advisor to Prime Minister Zulfi Bukhari.