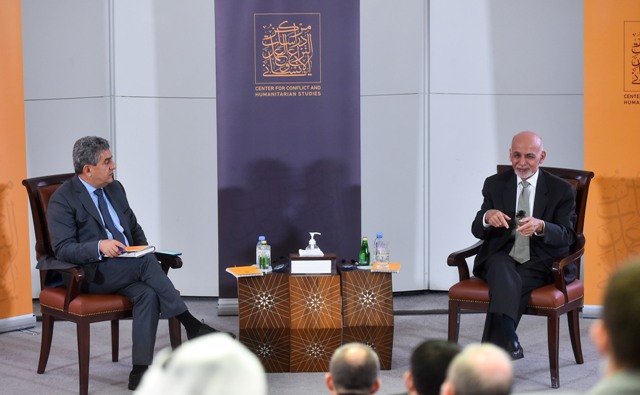 The people of Afghanistan hope for a comprehensive ceasefire after the Intra-Afghan dialogues aimed at ending the 20-year conflict in the country, Afghan President Ashraf Ghani has said.
President Ashraf Ghani was speaking on Tuesday at a lecture on the ‘Prospects for Peace in Afghanistan’, moderated by Prof Sultan Barakat, director of the Centre for Conflict and Humanitarian Studies (CHS) at the Doha Institute for Graduate Studies.
He said the negotiations are proceeding well and called for patience to understand each other.
He said he did not want to comment on the ongoing intra-Afghan discussions in Doha because it is important to allow the team function.
“The negotiating team has full authority and mandate of the people of Afghanistan,” he said.
The Afghan conflict, he noted, is “neither a civil war nor a separatist war as there is no faction fighting for separation”. “The groups are fighting to control the centre. Since we all want to live in Afghanistan, there is a great potential for peace,” he said.
In reference to the female members of the Afghan Negotiating Team present at the lecture, President Ghani lauded the role of Afghan women in the history of the country, including those who fought against the British rule and defended their homeland.
He said Afghan women do not need someone to speak for them as they are courageous to represent themselves, adding that 99 percent of Afghan population is Muslim equipped with long history of Islamic civilisation that is a binding force in the country.
Present on the occasion were students, members of the faculty, a number of diplomats, and members of the Afghan Negotiating Team.
Afghan President, who himself is a former educationist, said: “Peace in Afghanistan cannot be the peace of one group. It must be the peace of the people because the people are sovereign.”
He said he was optimistic about achieving peace in Afghanistan, and called for courage and commitment to achieve peace.
“We have to live together. Therefore, there should be courage to declare nationwide ceasefire,” Ghani said, giving example of Loya Jirga called by the government to release 400 Taliban prisoners as a show of courage to achieve peace.