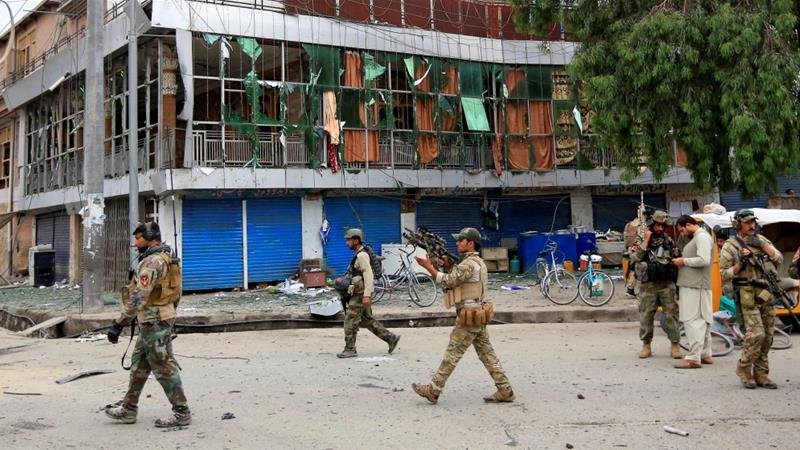 At least 12 people have been killed when gunmen, stormed a provincial government building in eastern Afghanistan, triggering clashes with security officials that lasted for five hours.

Attahullah Khogyani, the spokesman for the governor of Nangarhar province, told Al Jazeera that 42 people were also wounded in Sunday’s attack in the capital Jalalabad.

“Four attackers, five civilians and three finance department employees were killed in the attack and battle between the gunmen and security forces,” Khogyani told Al Jazeera.

A suicide car bomb exploded outside the building, which belongs to the provincial finance directorate, after which the attackers stormed the building, trading fire with security officials.

No one immediately claimed responsibility for the attack. Both the Taliban and a local Islamic State of Iraq and the Levant (ISIL, also known as ISIS) affiliate have carried out numerous attacks in Nangarhar.

Afghan security forces have struggled to combat the Taliban and ISIL since the US and NATO formally concluded their combat role in the country in 2014, shifting to a support and counterterrorism mission.

The Taliban have seized control of districts across the country, and the two groups have carried out attacks in the Afghan capital, Kabul, in recent months that killed scores of people.

On May 9, a suicide attack claimed by the Taliban and the ISIL group on two police stations in the Afghan capital Kabul killed five people and wounded 16 others.

Voter registration sites have been particularly targeted as the country prepares to hold its long-delayed legislative elections, set to take place in October.

Last year, the US pledged to increase its support to struggling Afghan forces, announcing plans for thousands of additional advisers and increasing air strikes in a bid to force the Taliban to enter peace negotiations.