A Miracle In History of Poverty Alleviation, 98.99 m Chinese Brought Out Of Poverty Line, Chinese Envoy To Qatar 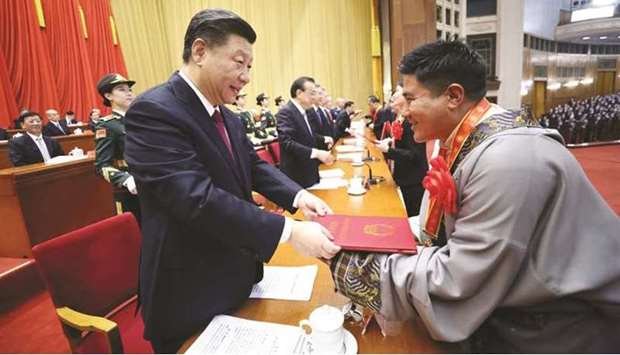 By Zhou Jian/Ambassador Of China To Qatar

Deep in the remote mountains that stretch for hundreds of kilometres in China’s inland Sichuan province, there was once an isolated, impoverished “cliff village”, which was connected to the outside world only by a near-vertical ladder made from cane. Now, everyone has left the village and moved into a new community built by the government, with supermarkets, schools and hospitals.

Xiji County, the southern part of Ningxia, lies on a desert landscape with little rain and barren soil. Today, villagers there have moved to government-built new homes with fertile fields and pleasant climate, leading a happy and wealthy life through farming and husbandry.

Gulang County was located in the western Province of Gansu. For generations, villagers lived in the mountains 2,500 metres above sea level. Life there was wet, cold and lacked basic supplies. Their houses were made from mud, their daily meals and water needs couldn’t even be guaranteed. Now, all of them have moved to a beautiful plain with government-built houses and convenient transportation. They are now leading well-off lives through husbandry and planting roses.

The tremendous changes in these three deeply impoverished areas are an epitome of China’s historical victory in the battle against poverty. On February 25, 2021, Chinese President Xi Jinping declared that China has achieved a comprehensive victory in the fight against poverty. Under the current standards, all remaining poor rural residents, totalling 98.99mn, have been lifted from poverty, as were all of 832 poor counties and 128,000 poor villages, and regional overall poverty has been resolved, the arduous task of eradicating absolute poverty has been completed, achieving a great miracle in human history of poverty alleviation.

Over the past eight years, under the leadership of the Communist Party of China (CPC), China has helped an average of more than 10mn people out of poverty every year. The total number equals the overall population of UK and Canada. We take the “two worries free and three guarantees” as the standard for poverty alleviation, and ensure all the poor people to have no worries about food and clothing, compulsory education, medical care, housing and drinking water safety.

These measures have better protected their rights to subsistence, development, education and medication. We have combined poverty alleviation with development, and realised fighting poverty through infrastructure development. We have built 1.1mn km of roads in rural areas and added 35,000km of railways. The reliability of power supply in rural and poverty-stricken areas has reached 99%, while optical fibre and 4G network have covered more than 98% of impoverished villages.

We have done everything possible to meet the basic housing demands of the poor. The dilapidated houses of 7.9mn  households and 25.68mn people have been renovated. A total of 35,000 centralised resettlement areas and 2.66mn housing units have been built. More than 9.6mn people have moved into new houses, equivalent to the total population of a medium-sized country.

China’s poverty alleviation population accounts for more than 70% of the global total. China has achieved the goal of poverty reduction in the UN2030 SDA 10 years ahead of schedule. UN Secretary-General spoke highly of China as the country that has made the largest contribution to global poverty reduction over the past decade.

No country in history has ever lifted hundreds of millions of people out of poverty in such a short period of time.  China’s practice has contributed unique experience for the global cause of poverty alleviation:

Strong leadership
It is conceivable how difficult it is to lift hundreds of millions of people out of poverty. The Communist Party of China and the government regard poverty alleviation as the most important task of governance. President Xi Jinping has chaired seven central conferences on poverty alleviation, conducted more than 50 investigations on poverty alleviation, visited 14 contiguous areas of extreme poverty, and conducted research on more than 20 poverty-stricken villages. The fight against poverty needs leaders and organisers. Governments at all levels have sent a large number of Party officials to each poor village to help the local people fight poverty. We call them “first secretaries”. Over the past 8 years, more than 3mn “first secretaries” and officials have devoted themselves to the fight against poverty, and more than 1,800 of them have sacrificed their lives.

People-centred principle
The Communist Party of China and the government firmly believe that happy life is the greatest human right. Focusing on impoverished people in specific groups including women, children, the elderly, the disabled and ethnic minorities, we work to ensure that everyone enjoys dignity and is free from hunger, and the rights to development, education, health, and housing. Ensuring a better life for the hundreds of millions of poor people in rural areas is President Xi Jinping’s top concern. He has stressed on many occasions that “whether we are well-off or not depends on our fellow villagers”.

Pulling strength together for major tasks. We have mobilised the whole Party and the whole society to facilitate the flow of talent, capital and technology to impoverished areas. Our approach is counterpart assistance. Some 342 economically well-off counties in the east have helped 570 poverty-stricken counties in the west, 310 departments of central government have assisted 592 targeted counties of poverty alleviation, and the armed forces have helped 3,500 poverty-stricken villages. In addition, entrepreneurs, scientists, teachers, sports stars and other people from all walks of life have taken an active part in the poverty alleviation campaign. Another 1.4bn Chinese people have all contributed their share to poverty alleviation, which has created a broad consensus and a strong force for poverty eradication.

Scientific and accurate strategies
We have provided scientific and precise assistance to people living in poverty, and created a personal documentary of each poor household for tailored plans. For those who are able to work, we focus on helping them get rid of poverty with their own skills, while those who are not able to work receive subsidies from the social welfare system. For areas of deep poverty where the living environment is extremely harsh, the focus is on relocating local residents to places more suitable for living and development. We have combined poverty alleviation with development, and made it the most effective way to eradicate poverty. We have turned remote mountainous villages with beautiful scenery into popular tourist attractions, planted unique high-yield crops, and introduced preferential policies to encourage enterprises to open factories in poor villages. We have combined poverty alleviation with education to guide the poor people out of poverty in their mindset, inspired them to pursue a better life, and changed their lives with wisdom and hard work.

Shaking off poverty is not the finish line, but the starting point of a new life and new endeavour. While we are winning the battle against poverty, we have also embarked on a new journey of rural revitalisation. We will speed up the modernisation of agriculture, turn rural areas from a development depression into a new height, and bring better and happier lives to the farmers.

Eliminating poverty is the common mission of mankind. Qatar has always played an active role in global poverty reduction. His Highness the Amir has repeatedly called for international co-operation in poverty reduction. Organisations like the Qatar Charity and Qatar Red Crescent have long provided generous assistance to the poor in the region and around the world, and helped children in poverty-stricken and war-torn areas to receive better education. We are not alone on the Great Way and the whole world is one family. China is ready to work with Qatar as a fellow partner in the global cause of poverty reduction, to promote international co-operation and fulfil our international responsibilities for poverty reduction, so that we can jointly build a community with shared future for mankind.