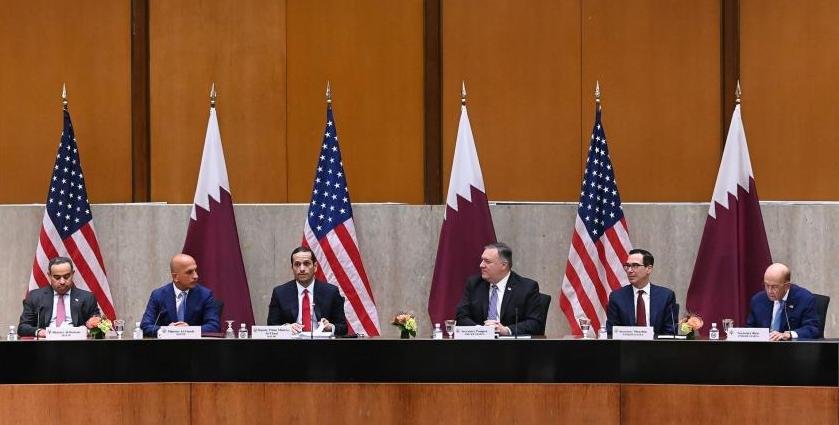 Sheikh Mohammed bin Abdulrahman Al-Thani in his opening speech said that the holding of the third session of the Qatar-US Strategic Dialogue is a demonstration of the flourishing relations between the two countries, enabled by the mutual commitment between Amir of State of Qatar, Sheikh Tamim bin Hamad Al-Thani and the US President Donald Trump that emphasizes broad areas of cooperation as well as the close friendship between the two countries.  He said that the very important development in Afghanistan is the latest example of the close interaction between our two countries at the political level.

He said: “We, in this third session of the strategic dialogue, are not only strengthening the existing economic, military and security cooperation between us, but also expanding it to include other equally important areas such as education, culture and development. ‘Today’s meeting represents another important milestone in historically deep relations between the State of Qatar and the United States of America’. He pointed out that the signing of the Memorandum of Understanding for the Qatar US 2021 Year of Culture, and the Memorandum of Understanding with the United States Agency for International Development and Qatar’s support to Fulbright scholarships, reflect the range and the depth of joint ties and underscores Qatar’s continued constructive engagement despite the unique regional challenges that our country has successfully managed during the past three years.

He said that “In addition to our support for many US states and cities in their efforts to deal with the Coronavirus (COVID-19) pandemic, the broad range of cooperation demonstrated here at the strategic dialogue makes clear Qatar’s strong affinity with the American people. Qatar views the United States not simply as a partner but as an ally and friend. He said that strong commercial partnership between both countries is witnessed from Qatar’s investment of over $200 billion in the US economy, and the United States has been an integral investor in Qatar and Qatar’s development. This investment translates into tens of thousands of jobs and life-changing opportunities for our people. We look forward to expanding these relations, through upcoming trade and investment promotion events. He pointed out that these events will include a roadshow in 2021 involving multiple delegations to several US cities to explore partnerships in technology, investment, energy, and other areas.

He said that  “We are also looking forward to our upcoming discussions on issues of common interest and reaffirm our commitment to deepen the partnership in areas that also include joint political and regional interests. We will also discuss a range of defense and security issues, including shared interests, opportunities for regional cooperation, mechanisms for the defeat of malign threats arrayed against us. He affirmed that Qatar and the US agree that such threats come among the biggest challenges facing today the two sides’ common vision to promote peace, stability and prosperity in the Middle East region in general.

He said that Qatar and the US will continue to strengthen coordination and enhance cooperation as per international law and security standards  to neutralize the threat of terrorism greatly contribute to making the world safer. Referring to recently hosting of Intra-Afghan negotiations in Qatar, he commended the efforts of Secretary Mike Pampeo for bringing peace in Afghanistan as well as towards achieving peace in the Middle East as a whole. He expressed Qatar’s praise of the US’ firm commitment to peace in the region and expressed Qatar’s happiness for the continuing close cooperation between the two countries to achieve this important goal.

His Excellency considered that the very important Afghanistan development is the latest example of the close interaction between our two countries at the political level. He added that they face issues that are not only important to the two countries, but also to the broader stability of the Middle East and neighboring regions.

He said that despite regional challenges including ongoing blockade against Qatar, cooperation between the two countries is strengthened since first Qatari-US strategic dialogue held in Jan. 2018. He thanked US for supporting to Kuwaiti mediation in lifting blockade by keeping respect for the sovereignty of Qatar. He said that Qatar’s foreign policy is based on values of peace, stability and prosperity, which took Qatar as resilient as well as has strengthened its relations with the international community to unprecedented levels.

In his concluding remarks, he announced  hosting of fourth strategic dialogue session next year in Doha.

Islamabad, 10 Oct. 2021 Father of Nuclear and Missiles programs of ...
END_OF_DOCUMENT_TOKEN_TO_BE_REPLACED