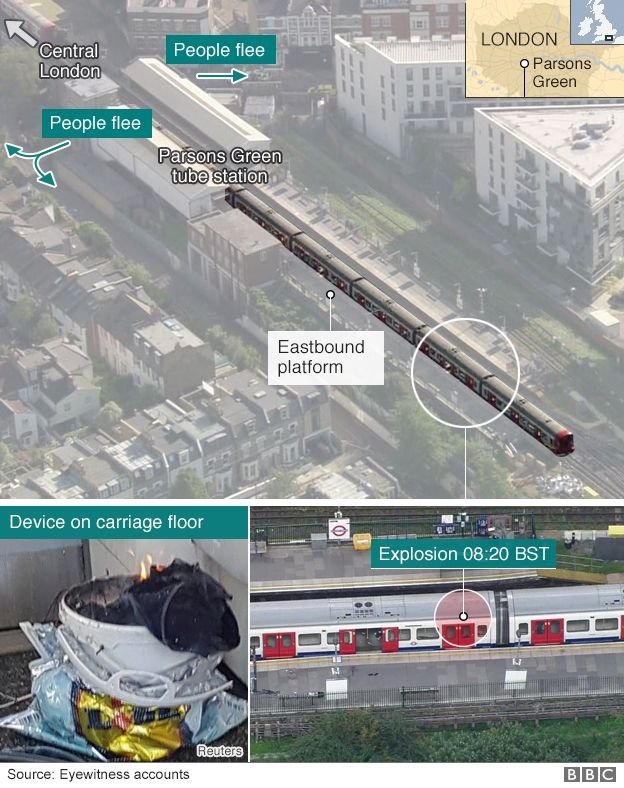 An “improvised explosive device” was detonated on a Tube train in south-west London during Friday’s morning rush hour, injuring 29 people.

The blast, at Parsons Green station on a District Line train from Wimbledon, is being treated as terrorism.

So-called Islamic State says it carried out the attack, which Prime Minister Theresa May condemned as “cowardly”.

A hunt is under way for the person who placed the device and the area around the station has been evacuated.

Specialist officers there securing the remains of the improvised device and ensuring it is stable.

Mrs May said the attack had been “intended to cause significant harm”.

She said the UK’s terror threat level would remain at severe – the second highest – but would be under review.

Speaking in Downing Street after chairing a meeting of the Cobra emergency committee, she said there would be an increased armed police presence on the transport network in London.

Hundreds of detectives and MI5 are investigating the attack, which took place at 08:20 BST on an eastbound train.

Assistant Commissioner Mark Rowley earlier refused to say whether anyone had been arrested.

Earlier reports in morning after the explosion,  Witnesses reported panicked scenes as a result of the blast at 08:20 BST at Parsons Green station on the District Line.

A white bucket inside a supermarket bag was photographed inside the carriage, although it did not cause extensive damage.

Police are treating it as a terror attack.