22 People Died, Dozens Injured In Bomb Attack On a Mosque In Parachanar, Pakistan 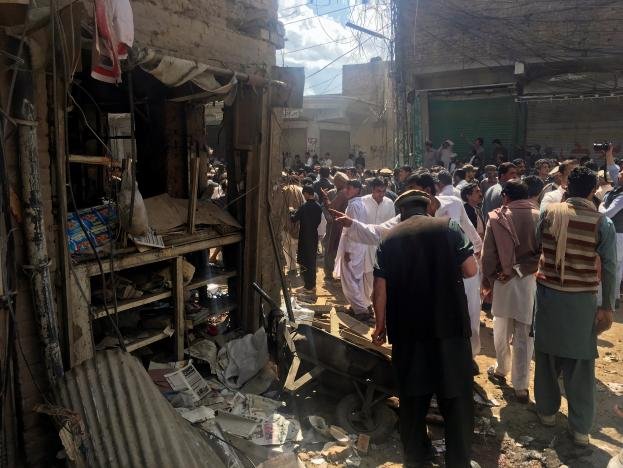 A bomb apparently targeting a mosque in Pakistan’s northwestern city of Parachinar killed at least 22 people on Friday and wounded dozens in an attack claimed by the Pakistani Taliban.

The explosion in a remote area bordering Afghanistan came as people gathered for Friday prayers near the women’s entrance of a Shia mosque in the central bazaar, the latest in a series of attacks across Sunni-majority Pakistan this year.

Sajid Hussain, a parliamentarian from Parachinar, said gunfire preceded the blast, which he described as a suicide attack. The city is located in an area with a large Shia population.

“The attack took place in a busy area and a women’s mosque appears to be the target,” he said.

The banned Islamist militant group Tehrik-i-Taliban Pakistan (TTP), often referred to as the Pakistani Taliban, said the blast was part of its operation Ghazi, named after a radical Islamist leader killed by Pakistani security forces in 2007.

Following a string of earlier incidents this year, the latest attack adds to fears of an increase in sectarian violence in Pakistan, a nuclear-armed state of some 200 million people.

Last month, more than 80 people were killed and dozens wounded in an attack on a crowded Sufi shrine in southern Pakistan that was claimed by Islamic State.

In January, at least 21 people were killed when an explosion hit a vegetable market in Parachinar, capital of the Kurram tribal region, where Pakistani security forces have battled militant groups for years.

That attack was claimed by the TTP and a branch of another militant group, Lashkar-e-Jhangvi Al Alami.

Authorities said a military rescue helicopter had been sent to the scene to help evacuate the injured.

Mumtaz Hussain, a doctor at the Agency Headquarters Hospital in the region, said five bodies, including a woman and two children, and more than three dozen wounded had been brought to the hospital and an appeal for blood donors had been made.

“Patients are being brought to us in private cars and ambulances and we have received over three dozen patients so far,” Hussain told Reuters.

The attacks have shattered hopes that Pakistan may have come through the militant violence that has scarred its recent history and increased pressure on Prime Minister Nawaz Sharif’s government to show it was improving security.

Sharif condemned Friday’s attack and said the government would keep up efforts to “eliminate the menace of terrorism”.

In a statement, he said: “The network of terrorists has already been broken and it is our national duty to continue this war until the complete annihilation of the scourge of terrorism from our soil.”

In the wake of last month’s attack in southern Sindh province, security forces launched a major crackdown across Pakistan, killing or detaining hundreds of suspected militants and closing off the border with Afghanistan for several days.