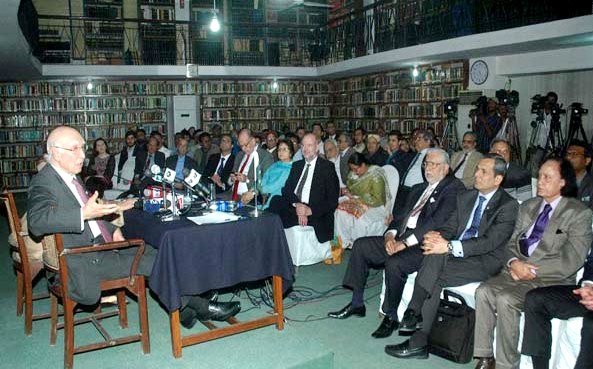 ‘ A strong and economically developed Pakistan is “an approaching reality” due to strong counter terrorism measures, internal reforms, active pursuit of energy and infrastructure projects and prudent economic policies pursued by the present government,’ told by Sartaj Aziz, Advisor to Prime Minister of Pakistan.

In his key-note speech on “Pakistan’s Foreign Policy: Challenges and Opportunities” held at The Pakistan Institute of International Affairs (PIIA), Karachi, he said that all foreign policy initiatives require a stable and supportive domestic environment and across the board political consensus. “I hope that will be forthcoming in the wider national interest.”

Sartaj Aziz said that the epicenter of economic development fast moving to Asia, and it is widely predicted that the 21st century belongs to Asia. He said parallel to these global trends, Pakistan’s
regional landscape remains complicated. “On one hand, the phenomenal rise of China and its close relations with Pakistan, combined with our improved ties with Russia have opened the prospects that finally, Pakistan geo strategic location can be converted from a liability into an asset for economic development of the country.

“On the other hand, this positivity is counter balanced by
India’s continuing policy to pressurize Pakistan, by sponsoring terrorism inside Pakistan to foment separatism or by ceasefire violations on the LoC (Line of Control) in Jammu and Kashmir to constrain Pakistan Army’s ability to deploy more resources on the western borders with Afghanistan.’
Sartaj Aziz said further complicating regional situation is
uncertainty in Afghanistan. “Since the reduction of ISAF forces, fighting has spread in different parts of Afghanistan and the casualties suffered by Afghan security forces are much higher. These security challenges are compounded by political differences and economic difficulties.”

Sartaj Aziz said that the most important achievement of the past three years has been a major upgrade in Pakistan’s relation with China. “The flagship connectivity project with China is CPEC to optimize our economic and trade potential,” he added.

He said CPEC is also a catalyst for regional economic integration. “It will foster regional harmony and forge closer relations among China, Pakistan and our neighbours,” he added.

Besides CPEC, he said, Pakistan is also actively pursuing various other regional connectivity projects like TAPI, CASA 1000, IP, and Torkham Jalalabad Kabul motorway to take further advantage of Pakistan’s geo-strategic and geo-economic disposition at the crossroads of three regions.

“Pakistan has also been able to improve relations with Russia and is then able to take full advantage of the new geo-strategic landscape in which the centre of economic activity is shifting to Asia,” he added.

Aziz said Pakistan is also committed to the SAARC process. “We regret the postponement of SAARC Summit in Islamabad and hope that this important regional organisation will not be held hostage by one country to suit its own parochial agenda,” he added.

Sartaj Aziz said, “We are strengthening our relation beyond our neigbourhood, focusing on the Muslim World, East Asia and Europe. We seek to deepen cooperation in areas of security, counter-terrorism, promoting economic and trade relations and seeking investment, which is essential for our economic growth.

“We are also utilising United Nations and other multilateral organisations to promote our interests in areas of peace and security, sustainable development, climate change, energy and food security.

“In the past two years, we have achieved remarkable success in countering terrorism at a time when the world is still deeply worried about this menace. Operation Zarb e Azb was started in June 2014 and National Action Plan launched in January 2015 are receiving worldwide appreciation.

“The heroic efforts and sacrifices of our armed forces in Zarb e Azb supplemented by intelligence based operations around all major urban centres, Madrassah reforms and conviction of terrorists through military courts, have weakened terrorists and extremists.

“The resultant improvement in the security situation, specially in Karachi, has brightened the investment climate. As the energy shortages are overcome, specially for the industrial sector, the growth of the economy has also recovered from a low of 3 percent in the period 2006 to 2012 to about 5 percent with good prospects of higher growth in the coming years.

“The performance of Pakistan’s equity markets and also in geo politics has been widely acknowledged by major rating agencies and global media leaders like Forbs and Spectator.

“This turn around in the Pakistan economy can become a key positive factor in further strengthening Pakistan relations with the Middle East and Africa in the coming years.” Adviser to Prime Minister on Foreign Affairs Sartaj Aziz pointed out that there are three important foreign policy challenges that need to be managed with dexterity and wisdom, which are Pakistan’s relations with Afghanistan, India and the United States.

He said that, for relations with Afghanistan, Pakistan has taken a number of measures that promote its own security and contribute to creating a peaceful neighbourhood. These include promoting Afghan led and Afghan owned peace and reconciliation process, supporting Afghan government in economic development and national reconstruction, and enacting robust border controls at Pak afghan border to prevent spillover effect of instability in Afghanistan.

“India denies a legitimate and popular freedom struggle in Kashmir by brandishing the region as its “integral part”. But after the new Intefada, ignited by the extra judicial death of freedom fighter Burhan Muzaffar Wani, on 8 July, and which has continued for the past 7 months despite unprecedented brutality by Indian forces, no one now accepts the Indian narrative that the Kashmiri uprising in the result of ‘cross border terrorism’. Voices even in India are going louder against this narrative.”

Sartaj Aziz said Pakistan demands that for peace in Kashmir, India must face the ground realities and recognise indigenous nature of the Kashmiri movement and resume meaningful dialogue.

“However if India persists with its hostile anti Pakistan policies and continues to malign Pakistan, Pakistan will also have to intensify its global campaign to expose the false Indian narratives,” he added.

Another important dimension of Pakistan India relations is the imperative of Strategic Stability in South Asia, he said, adding that for this, Pakistan is committed to maintaining Credible Minimum Deterrence.

He said that managing relations with the United States is another foreign policy challenge. Advisor on Foreign Affairs to Prime Minister of Pakistan said a strong partnership between Pakistan and the US remains critical to promoting and sustaining peace, security and stability in the wider region.