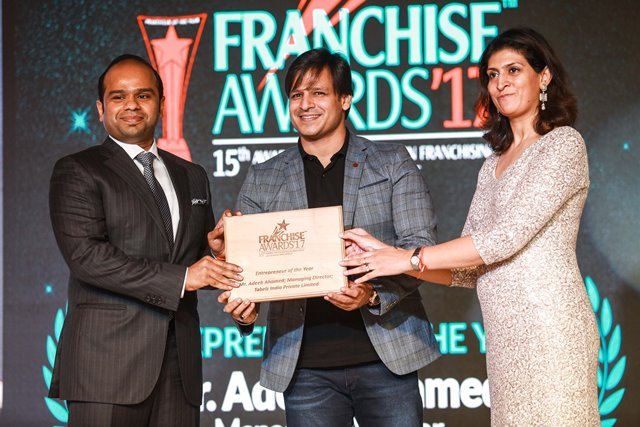 Adeeb Ahamed, Managing Director, Tablez, was recently honoured with the ‘ Entrepreneur of the Year award ‘at the Franchise Awards 2017 held at The Lalit, New Delhi on Wednesday. In its 15th edition, Franchise Awards 2017 are India’s top most honour in retailing and recognizes personalities and businesses for their excellence in retailing, franchising and business development.

Speaking after receiving the award, Adeeb said, “It is a great honour to receive this award. The Franchise Awards respects the core value of entrepreneurial spirit and this recognition encourages me to further expand our business here in India and propel it to greater heights.”

Judged by an independent panel of experts and supported by the Indian Franchise Association (IFA) & with Francorp India as Process advisors, Franchise Awards rewards individuals and organizations that have shown outstanding business acumen, passion and achievement of franchise businesses across India.

Adeeb Ahamed heads Tablez, the organized retail arm of Lulu Group International, along with Lulu Exchange, the financial services company which has more than 170 branches worldwide and Twenty14 Holdings, hospitality investment firm which owns prestigious properties around the world.

Tablez has introduced leading global brands in F&B, toys, lifestyle and apparel to India. The company recently opened the first outlet of leading American brand Toys R Us and Babies R Us at Phoenix Marketcity in Bengaluru.

Tablez has introduced Spanish fashion brands Springfield and women’secret to India, while on the F&B front it holds the franchise rights for Cold Stone Creamery and South Africa-based flame-grilled chicken concept, Galito’s. In addition to them, Tablez has successfully developed two home-grown brands: Bloomsbury’s – a boutique café and artisan bakery, and Peppermill – a colonial Indian themed fine dining restaurant.