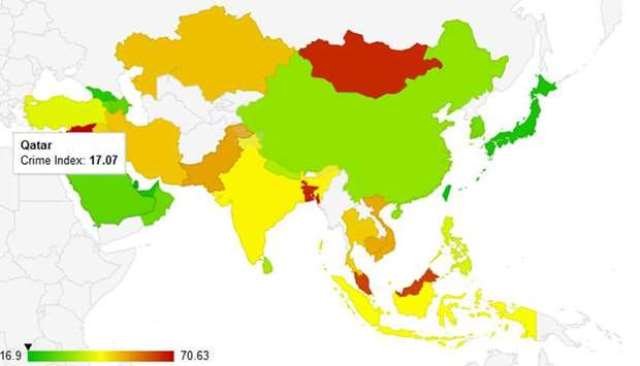 Mohamed Al-Muhannadi, Director of Population and Social Statistics department at The Ministry of Development Planning and Statistics said Qatar ranks among the world’s lowest in terms of crime rates, reflecting the country’s global security status, which goes in line with the Qatar National Vision 2030 that aims at creating a society of security, justice, and economic prosperity.

AlMuhannadi made these remarks during a presentation at the opening of a workshop organised by the ministry on Monday on crime statistics, in which he told that Qatar has become a prominent centre in the world security indicators.

He noted Qatar has the lowest crime rate in the Middle East and the seventh-lowest crime rate globally in the same index, according to the latest annual Global Crime Index,  one of the largest and most popular encyclopedias on the Internet.

Al-Muhannadi pointed out that Qatar topped the list of Middle East and North Africa nations in the Global Peace Index for the ninth year in a row, and ranked 30th among the 163 countries included in the report of the London Institute for Economics and Peace. He said Qatar has maintained its first ranking in the Middle East and North Africa over the past years (2009-2017) and it has also achieved advanced positions globally in the same period by achieving high assessment rates that surpassed many developed countries.

He pointed out that Qatar ranked second on the list of the safest 24 countries in the world, according to the annual report issued by the Swiss Golden Visa organisation in 2016, expressing the ministry’s appreciation for the performance of officials and components of civil society in the field of security.

Al-Muhannadi added that the Ministry of Development Planning and Statistics was working in co-ordination with the data sources in order to standardise the concepts and terminology of the crime statistics data between the concerned parties so that each term was defined by the clients of those data.

Meanwhile, Sultan al-Kuwari, Assistant Undersecretary of Statistics Affairs at the Ministry of Development Planning and Statistics, stressed the importance of crime statistics and security information and their role in the development of security plans and strategies that help to protect society and maintain order and public safety.

He added that the two-day workshop on crime statistics was in line with the requirements of the national development strategy and Qatar National Vision 2030.
He pointed out that the workshop would also be the starting point for the implementation of the recommendations of the United Nations Statistical Commission (UNSD) in accordance with the crime statistics manual adopted in that field.

Experts and technicians in the field of crime statistics attended the workshop along with representatives of the main stakeholders responsible for crime statistics in the country and a number of specialists and those interested in this field.

The workshop aims at identifying sources of crime statistics, their importance and how to develop them, identifying indicators of sustainable development of crime statistics, as well as informing the participants about the international classification of crime for statistical purposes of the United Nations Office on Drugs and Crime.
It also studies how to use the best advanced and modern methods in the field of crime statistics in order to improve the quality and dissemination of data and enhance the concept of frameworks of cooperation and exchange between institutions and ministries in the country in this area.