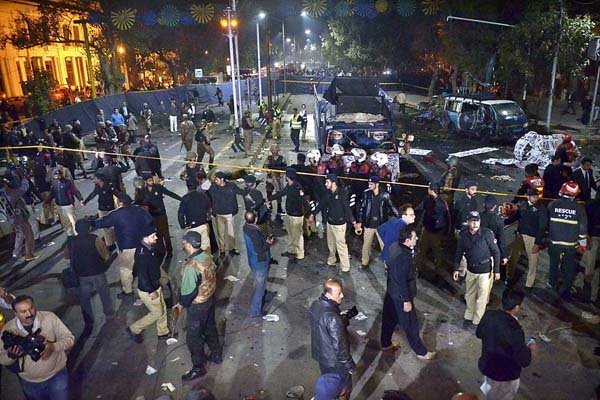 Thirteen persons including two senior police officers were killed while 86 others sustained multiple injuries when a suicide attacker blew himself up at the Charing Cross, The Mall here on Monday.

“Deputy Inspector General (DIG) Traffic Lahore Capt. (Retd) Syed Ahmed Mubin and SSP (Operations) Zahid Mehmood Gondal were returning from the scene after successful negotiations with the protesters when the suicide attacker appeared from behind a media van and detonated the explosive device at 6:10 pm,” said the IGP Punjab Mushtaq Ahmed Sukhera.

The Rescue teams rushed to the site of the blast and shifted the injured to various hospitals including the Ganga Ram, Mayo, and Services.

The Punjab Government declared emergency in all hospitals of the provincial metropolis to provide best medical treatment to the injured. All the medical staff was called by the hospital administration to deal with the emergency.

The city hospitals’ administration also called for blood donations from the citizens.

Provincial Law Minister Rana Sanaullah told the media that the attack appeared to be a suicide attack, adding the blast occurred inside the high security zone.

The Minister said that 6 policemen were among the dead, adding that the tragic incident took place due to lapse in the implementation of security SoPs.

To a question, Rana Sanaullah said that fool-proof security would be provided to participants of the Pakistan Super League (PSL).

Health Minister Khawaja Salman Rafique said, emergency had been declared in the Ganga Ram Hospital while the Services Hospital and others have been alerted following the incident.

The Law Enforcement Agencies (LEAs) have also arrested 3 suspects from and around the crime scene.

Punjab Chief Minister Muhammad Shehbaz Sharif, while condemning the incident, has sought a report from the Inspector General of Police (IGP) Punjab on the tragic incident.

The Punjab government has declared February 14 (Tuesday) as a Day of Mourning to express solidarity with the martyrs of the Charing Cross blast. Trade bodies of the city have also announced to keep their shutters down on February 14 in protest.

20 January 2022 By Ashraf Siddiqui More than 7,000 books of different ...
END_OF_DOCUMENT_TOKEN_TO_BE_REPLACED