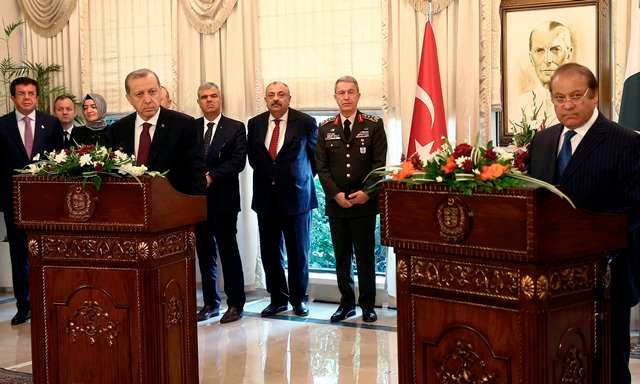 Joint Declaration on the Future Directions of Pakistan-Turkey Strategic Relationship

During the meeting between His Excellency President Recep Tayyip Erdogan and Prime Minister of the Islamic Republic of Pakistan His Excellency Muhammad Nawaz Sharif, at Islamabad on 17 November 2016, the two leaders exchanged views on the entire spectrum of Pakistan-Turkey bilateral relationship as well as issues of regional and international importance.

The two sides: Emphasized the time-tested, historic and ever-growing fraternal ties between the two people and governments, epitomized by exceptionally strong bonds of goodwill, mutual trust and understanding, that are embedded deep in common cultural and religious heritage, and a shared vision for the future; Expressed satisfaction over the progress achieved towards transforming this warm and cordial relationship into a strong strategic partnership, and reiterated their mutual resolve to explore new avenues for collaboration, to utilize untapped potential for the mutual benefit and prosperity of the peoples of the two countries; Reiterated strong condemnation of the heinous coup attempt in Turkey on 15 July 2016, paying rich tributes to the brave and resilient Turkish people who stood resolutely in defense of democracy against the forces of darkness;

Expressed firm resolve to continue their strong mutual support to each other on issues of core national interest, and in defense of the peace and prosperity of the two nations;

Expressed satisfaction over the progress achieved towards implementation of on-going projects under the framework of the Pakistan-Turkey High Level Strategic Cooperation Council (HLSCC),

and reaffirmed the resolve to explore new avenues for collaboration in the forthcoming 5th Session of the HLSCC, to be held shortly in Turkey;

Appreciated the significant progress achieved so far towards concluding the comprehensive bilateral Free Trade Agreement (FTA), and decided to complete the negotiations process by the end of 2016;

collaboration with regard to preservation and restoration of archeological and historical sites;

and promotion of Turkish and Urdu languages and literatures in the two countries including through the Cultural Centers being established,

Agreed to develop a comprehensive, long-term and forward-looking framework for defense cooperation between the two countries;

Decided to broaden the frequency and scope of bilateral consultations on Foreign Ministers as well as Foreign Secretaries levels and to expand these consultations to matters pertaining to Organization of Islamic Cooperation (OIC) as well;

Underscored the need for resolution of all outstanding differences between Pakistan and India, including the core issue of Jammu and Kashmir through a sustained dialogue process and in accordance with the relevant UN Security Council resolutions;

Expressed their deep concern about the increased tension and losses of innocent lives and casualties occurring recently in Jammu and Kashmir;

Applauded the resilience and perseverance of the peoples of the two countries as well as the sacrifices and bravery of the military and law enforcement personnel of both countries in the fight against the common threat posed by terrorism;

Noted with concern the trend towards exceptionalism and sidelining of non-proliferation objectives for commercial or political interests, which is detrimental to the credibility of the global non-proliferation regime and, in particular, to the strategic stability in South Asia;

Called upon the international community to combat Islamophobia, religious discrimination and stereotyping against Muslims; committed to commencing joint initiatives in the context at the international fora, in particular at the United Nations and the Organization of Islamic Cooperation (OIC);

and agreed that the assumption of Chair of OIC summit by the Republic of Turkey presented a valuable opportunity in this regard;

and called for the implementation of relevant UN Security Council resolutions to resolve the long-standing disputes on the agenda of the Security Council, especially those pertaining to the Muslim Ummah;

Urged the international community to play its due role in mobilizing support and assistance for the refugee hosting countries, including those facing protracted refugee situations;