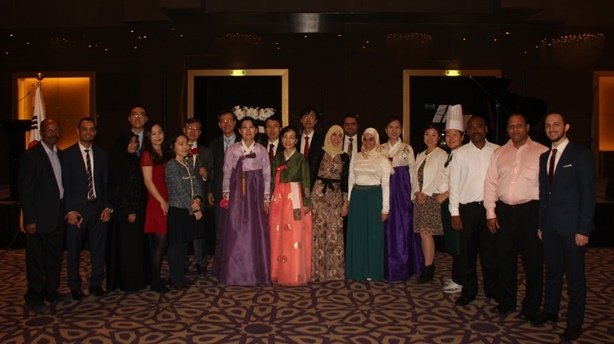 Ambassador Heung-Kyeong Park of Republic of Korea has lauded bilateral relations between State of Qatar and Korea and regarded as ‘continue to evolve’. He was addressing on the occasion of National Day celebrations held at the Hotel Grand Hyatt Doha. ‘I am pleased to say that Korea-Qatar bilateral relations continue to evolve. In November of 2014, His Highness Sheikh Tamim bin Hamad Al Thani, Emir of Qatar visited Korea, while President Park Geun-hye reciprocated by visiting Qatar in March of 2015. On those occasions, our two countries have agreed to expand the relationship beyond energy and infrastructure to education, health care, ICT and other areas.’

Ambassador Park announced that 4th session of Korea-Qatar high level strategic cooperation committee meeting in Seoul will be held early next month. He told that Qatar delegation will be led by Dr Mohammed bin Saleh Al Sada, Minister of Energy and Industry.

He said that Korea-Qatar Medical Forum will be held by end of November on the side line of Qatar Foundation WISH conference in Doha to look into various possibilities of cooperation in sharing knowledge and experience in medical techniques. He said ‘ In the healthcare area, some Korean hospitals now wish to cooperate with their Qatari counterparts’.

‘Korea and Qatar have also cooperated in new types of joint projects such as the non-hydrocarbon LED manufacturing industry. The Korea-Qatar LED project is in progress with a view to producing MENA-tailored LED lights in cooperation between Korean LED consortium and its Qatari counterpart. At the initial stage, LED plants will be built at a cost of 34 million USD and will produce 500,000 units of LED lights per year. ‘

Ambassador Park said ‘Korea is currently getting through various difficulties, mainly caused by the global economic slowdown, military threats from North Korea and domestic political instability. As you are aware, Korea still remains a remarkable example of economic, social and political development over six decades from the ashes of Korean War of the early 1950s. Likewise, though the present difficulties may be substantial, I believe Korea as it always has will manage to navigate such obstacles through the concerted efforts of its hardy citizens.’

Korean envoy to Qatar said that Korean Embassy new premises expected to be ready by early next year and will have Opening Ceremony on the occasion.

A Cake cutting ceremony was held joined by Dr. Mohammed bin Saleh AlSada, Minister of Energy & Industries of State of Qatar and ambassadors.