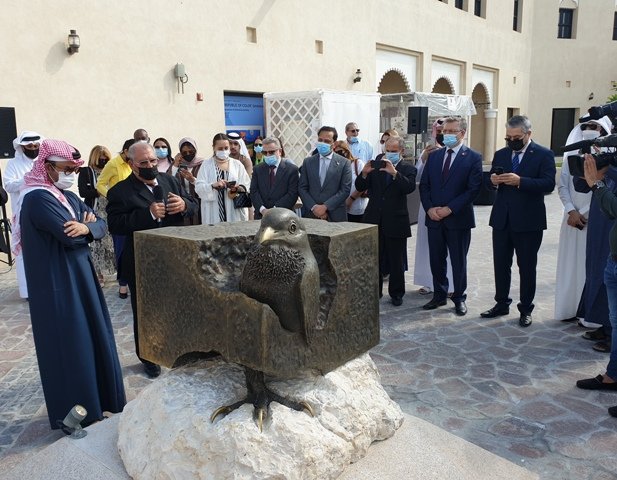 AMbASSADoR of Cuba to Qatar HE Eumelio Caballero Rodriguez presented a bronze falcon sculpture designed by a Cuban artist to the Cultural Village Foundation (Katara), at a ceremony attended by Katara General Manager Dr Khaled Ibrahim Al Sulaiti, ambassadors and other guests.

The outgoing Cuban ambassador said the ceremony coincided with the 32nd anniversary of bilateral diplomatic relations between Qatar and Cuba, formally established on December 13, 1989.

He said the simple artwork is full of national values.“We wanted to perpetuate in this beautiful Katara plaza a non-perishable symbol that would remind the people of Qatar and Cuba and future generations of the close and fraternal friendship that late Commander-in-Chief Fidel Castro Ruz and the Father Amir HH Sheikh Hamad bin Khalifa Al Thani forged between our two countries many years ago,” he said.

He said the relations have been developing since then until the high level achieved today in all areas, mainly in the health sector, describing the Dukhan Cuban hospital with its 500 professionals as “the most humanistic and visible expression of this cooperation”.

Talking about the sculpture, the envoy thanked Dr Sulaiti for Katara’s support in making the project a reality. he said the sculpture is designed and produced by Cuban artist Julio Reynaldo Zamora in Havana. He added that the sculpture named ‘Friendship’ features two symbolic birds of the two countries. The artwork merged Tocororo national bird with the beautiful colours of the Cuban flag and falcon, a bird much loved and revered by the Qatari people.

The envoy extended his warmest greetings to the Amir His Highness Sheikh Tamim bin Hamad Al Thani and the people of Qatar on the forthcoming Qatar National Day, wishing the country continuous successes in its economic and social developments.

Dr Sulaiti thanked the Cuban ambassador for the amazing gift to Katara, stressing that the piece of work will remain for many years as a symbol of close friendship between both countries and also of the friendship of the outgoing ambassador.