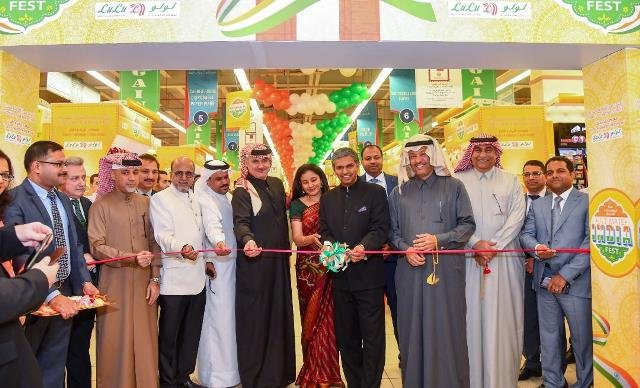 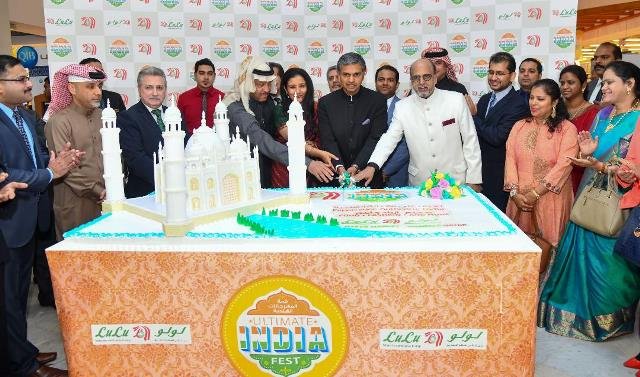 Lulu Group has organized the ‘Ultimate India’ Festival from 29th January to 04th February.  The festival was inaugurated by P. Kumaran, Ambassador of India to the State of Qatar, at Lulu Hypermarket, Al Gharafa, in the presence of Sheikh Hassan bin Khaled Al Thani, Dr. R. Seetharaman, Group CEO of Doha Bank, Mohamed Althaf, Director of Lulu Group and a host of dignitaries from Ministry, Banks, retail/FMCG sectors including officials/staff from the Lulu chain and a large gathering of shoppers and well-wishers from different communities.

The week-long festival is dedicated to the Indian culinary and food tradition and will showcase the whole new range of Indian food and cuisines, fresh vegetables and fruits, and exciting offers and promotions in Indian grocery products, sarees and many more product ranges.  The festival will also highlight the diverse culture and the spirit that was handed down by generations through centuries, symbolizing one India.  The inaugural ceremony has also featured a few traditional art-forms such as Kathakali, Mohiniyattam and Bharatanatyam etc., with a view to enrich the theme.

As part of the above festival, a promotion on Indian Silk and Ethnic Wear was opened by Ritu Kumaran, wife of the Indian Ambassador yesterday.  A wide assortment of pure natural and synthetic silk from India including saris, readymade garments and dress material went on display and sale at discounted rates at all Lulu outlets across Qatar.  Indian Silk is one of the major categories of India’s exports worldwide. Fair Exports India Pvt. Ltd. – an Export distribution Centre of Lulu Group – has been the winner of the ‘Best Exporter Award’ for Indian Silk Saris and Garments by the Indian Silk Export Promotion Council since 1996 including current year.

Lulu Group has been conducting this festival on the theme ‘Incredible India’ in all its regions since many years.  India as a nation is famous for its rich cultural and culinary heritages and with vast landscape it encompasses many states, religions and languages.  The culture of India refers collectively to thousands of distinct and unique cultures of all religions and communities present. India’s languages, religions, dance, music, architecture, food and customs differ from place to place within the country.

The Indian culture often labeled as an amalgamation of several cultures that spans across South East Asian states and has been influenced by the history of many centuries. Many elements of India’s diverse cultures, such as indian religions, Indian philosophy and Indian cuisine have a profound impact across the world.

The festival, which runs from 29th January till 04th February, is being held simultaneously across all Lulu Hypermarket outlets in Qatar and offers exciting discount on a wide range of imported products from India. The festival was largely focused on the food and cuisine of India and the event has become popular since many years. The general characteristics and common ingredients of Indian food are numerous spices, to create flavor and aroma.

A wide range of Indian food and sweets are on display at very attractive prices at all Lulu Hypermarkets, and special counters were set for tasting and sampling.

Another highlight was the Official launch ceremony of Mahindra vehicles in Qatar, which was held during the inauguration of India Fest and attended by Joydeep Moitra, Head of International Operations and Dinesh Choudhari, General Manager Exports Middle East & CIS from Mahindra Auto Division. To add to the excitement of Indian fest, customers who shop at Lulu will have the opportunity to win a XUV 500 when they shop for QAR.50.

Mohamed Althaf, Director of Lulu Group International said “We have always tried to do similar festivals and events to connect with the large cosmopolitan population residing in this great country.  Our main aim is to bring and showcase large variety of Indian products to the discerning shoppers.  We have always believed that Lulu is not just a place for shopping alone but is a place where we do things to spread happiness.  The shoppers can look forward to a week-long celebration of India at all our hypermarkets full of great offers, products, competitions and cultural shows”.

Doha, 25 June 2022 THE Embassy of Nepal and the Non-Resident ...
END_OF_DOCUMENT_TOKEN_TO_BE_REPLACED