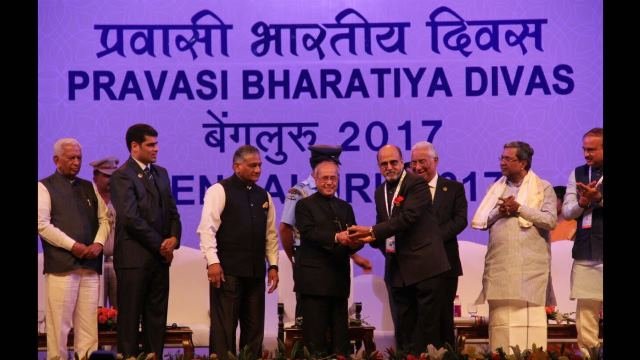 Dr. R. Seetharaman, Doha Bank CEO was conferred with the Pravasi Bharatiya Samman Award (PBSA) by the President of India, Shri Pranab Mukherjee at the PRAVASI BHARTIYA Divas Convention today, 9th of January 2017. The award is the highest honour conferred on overseas Indians by the Government of India in recognition of their achievements both in India and abroad.

The PBSA was conferred for his significant contribution to Building closer links between India, the overseas Indian community in GCC and their GCC Countries and for the welfare of the local Indian community in GCC. Some of the key initiatives brought by him include arranging Credit and Investment facilities to Indian Corporate & FIs.

He is a Benevolent Philanthropist contributing to social causes, underprivileged and people with special needs. He is also a recognized Economic Commentator by global financial media over last three decades.

On receiving the Award Dr. R. Seetharaman said, “It is a great privilege to receive the Pravasi Bharatiya Samman Award and I would like to thank the Indian Government for considering me for this award. India today is poised for a giant leap from the ranks of developing countries to developed countries. Indian citizens living outside India also have a responsibility on this progress and hence should look forward to contribute to the Welfare of India.”

‘ This can be done through remittances, investments, trade and other routes as well. I believed that the Indian diaspora in GCC can play an important role on above areas and thereby promote bilateral relationships between GCC and India. This award further inspires me to contribute to the strengthening of bilateral relationships between GCC and India. I once again thank the Indian Government for this Award,’ 2017 awardee Dr. R. Seetharaman said.

Dr. R. Seetharaman also gave insight on significant bilateral relationships between GCC and India. He said “Remittances to India from the Gulf countries in 2015-16 was $35.9 billion. GCC–India trade was close to $100bn in 2015-16.”

‘ Indian Diaspora in GCC can leverage their relationships with GCC Sovereign Wealth Funds to contribute to India’s FDI. India would be keen to welcome more investments and strategic support from GCC especially in infrastructure, education and research, travel and tourism, agriculture and food processing. Promote Cooperation in the Exchange of Intelligence related to Money Laundering, Terrorism Financing and Related Crimes, electronic crimes between India and GCC Countries. Indian companies can participate in various infrastructure projects pertaining to Qatar FIFA 2022 World cup and Dubai World Expo in 2020,” He said in his speech on the occasion.