‘ASEAN Food Festival 2017 Takes Off in Lulu Hypermarket In Qatar 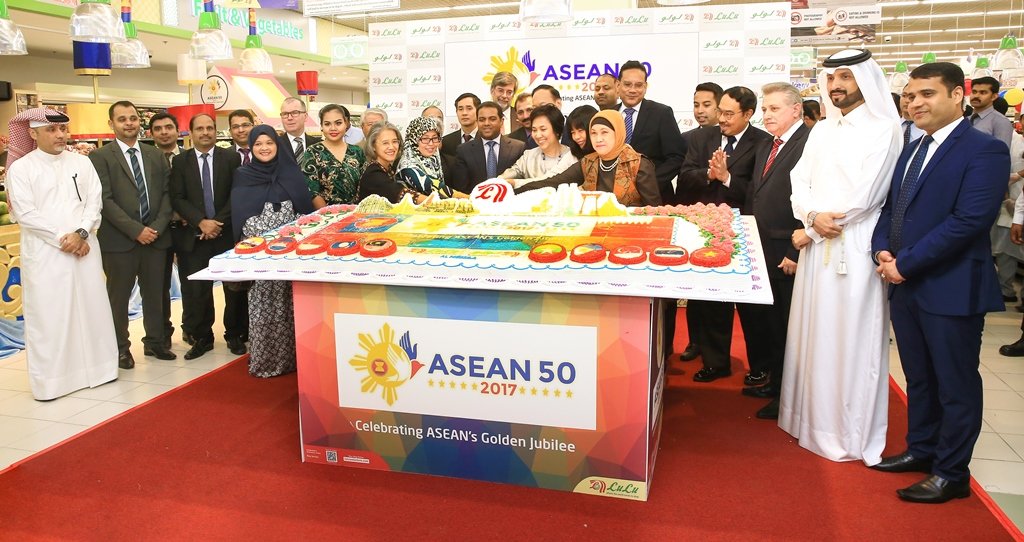 Lulu Group in cooperation with Qatar based ASEAN Diplomatic Group inaugurated ASEAN Food Festival at Lulu Hypermarket, Al Messila, on the occasion of the 50th Founding Anniversary of the Association of Southeast Asian Nations (ASEAN).

Mohamed Althaf, Director of Lulu Group, in his remarks, extended his heartfelt greetings on this milestone occasion. He said that this event was a timely effort at promoting ASEAN food products in Qatar. ASEAN countries are playing a vital role in the food safety and we are looking forward to co-operate more with our partners from the ASEAN region to accelerate the imports.

He said that Lulu Group has strong business ties with the ASEAN and other Asian countries since last two decades.  Over the years, we have enjoyed excellent support and cooperation from each of your Embassies. We assure you of our continued support in the future to further strengthen our relationship.”

The festival being held simultaneously across all Lulu Hypermarket outlets in Qatar and offers exciting discount on a wide range of imported products from ASEAN countries. The festival at Lulu was largely focused on the food and cuisine of ASEAN countries and the event has become popular in Qatar since year 2010.  The collective effort of the ASEAN Embassies is to promote the products of ASEAN origin, in the Qatar market.

Special counters were set to enable the customers and food connoisseurs to taste the fruits and different varieties of food items.  Apart from the food category, a wide range of Health & beauty and Household items were also on shelves at highly competitive prices.

Marking the beginning Golden jubilee celebrations, Royal Thai Embassy hosted the Flag raising ceremony on 08 August 2017, followed by a Seminar on ‘ASEAN’s investment potentials’ organized by the ASEAN Committee in Doha, that took place on 20 November 2017 with the participation of prominent businessmen.

The ASEAN was established on 8 August 1967 in Bangkok, Thailand, with the signing of the ASEAN Declaration (Bangkok Declaration) by the Founding Fathers of ASEAN, namely Indonesia, Malaysia, Philippines, Singapore and Thailand. Brunei Darussalam then joined on 7 January 1984, Viet Nam on 28 July 1995, Lao PDR and Myanmar on 23 July 1997, and Cambodia on 30 April 1999, making up what is today the ten Member States of ASEAN.

Lulu Group has been organizing the ASEAN Food Festivals since long, with the objective of promoting food products of different ASEAN countries and culinary heritage of the East among the local community. Over the years the festival gained a wide popularity and the volume of imports have increased considerably.

Lulu’s management indicated that it has been importing products from ASEAN countries for more than a decade in Qatar, and with this festival Lulu intends to further promote products of ASEAN through their stores in Qatar.

Lulu Group has become the largest retailer and importer of agricultural produce from the ASEAN countries, and owns Export logistics centres in most of the ASEAN countries, Far East and other parts of the world. Thailand Ministry of Commerce conferred the ‘Thailand’s Best Friend Award’ in the recent past on Lulu Group in honour of their best efforts towards import of merchandise from Thailand.