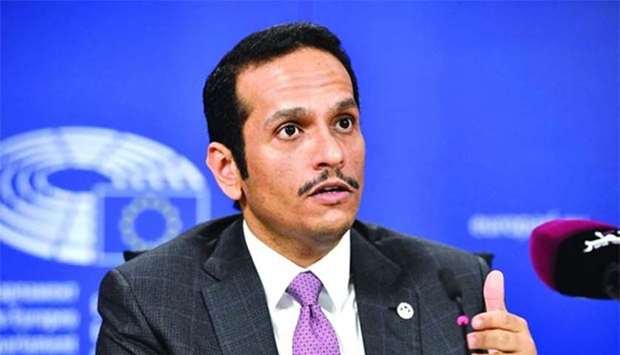 Mohammed bin Abdulrahman Al-Thani, Foreign Minister of State of Qatar affirmed that Qatar does not believe in internationalizing the Gulf crisis, but rather believes in the Gulf Cooperation Council (GCC) and resolving the crisis through dialogue. He stressed that Doha is the party that initiated the call to respect the Kuwaiti mediation.

At a press conference in European Parliament in Brussels today, Qatar Foreign Minister said that the countries of the West did not respond to the accusations against the State of Qatar regarding the support of terrorism, noting that the siege countries did not provide any evidence to support their accusations about Qatar’s interference in their internal affairs.

Mohammed bin Abdulrahman Al-Thani stressed that the siege countries are the party that violated the Riyadh Agreement, stressing that these countries have put the GCC at risk by attacking a member state, pointing out at the same time that there is consensus within the GCC on a general policy and on that each member state is sovereign.

Minister called on the siege countries to prioritize resolving other crises, instead of creating a new crisis with Qatar.

With regard to pilgrimage (Hajj), Mohammed bin Abdulrahman AlThani said that Saudi Arabia has not facilitated the pilgrimage process for Qatari citizens, and that Doha considers the Saudi authorities responsible for their safety during the pilgrimage season.

The Foreign Minister said that the State of Qatar withdrew its ambassador from Iran in solidarity with Saudi Arabia and returned him to Tehran after the causes have ceased to exist. He pointed out that the siege countries do not accept the other opinion, and accuse all those, who disagree with them, for the support of terrorism. He added that their list of “terrorist” individuals and institution was based on their own assessments.

Mohammed bin Abdulrahman Al-Thani stressed that the State of Qatar is committed to all its contracts even in the midst of the crisis, and that Qatar is working with international organizations to manage the aviation affairs.

20 January 2022 By Ashraf Siddiqui More than 7,000 books of different ...
END_OF_DOCUMENT_TOKEN_TO_BE_REPLACED