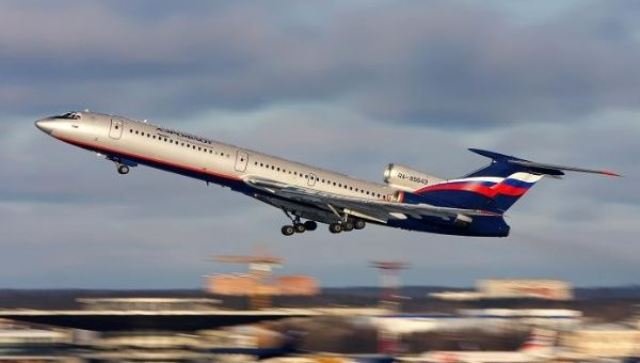 A Russian Military Tupolev Tu-154 plane with three engines was carrying more than 60 members of Russian army’s official choir traveling to perform in Syria has crashed in the Black Sea near Sochi. Russian Defense Ministry announced all on-board feared dead.

Military Choir was heading towards Syria to perform for Russian Air Force personnel on New Year celebrations. Among passengers were eight soldiers, eight crew members and nine (09) Russian journalists, including a TV crew from Channel One, were also among those on board.

According to State-run News agency Tass, the military plane took off from Moscow and was headed to the Russian Hmeymim airbase in Latakia, Syria, where Russia has a large military presence, for a concert ahead of New Year’s Eve.
Plane vanished from radar at around 5:20 AM, local time (8:20 p.m. Saturday ET), just after 20 minutes of it’s take-off.

Valery Kahlilov, Conductor of famous Russian Military Choir was also among the passengers.

Referring to Ministry of Defence of Russia, according to various media reports, more than 3,000 rescue workers, 32 ships, over 100 divers flown in from across Russia, were searching the crash site at sea and along the shore. Emergency crews found fragments of the plane about a mile from the shore.

‘Alexandrov ensemble’ was founded in 1928 and is the official choir and dance group for the Russian military. It was named after its first director and organizer, Alexander Alexandrov, famous for composing the music for Russian national anthem.

The ensemble with around 200 members has won numerous international awards