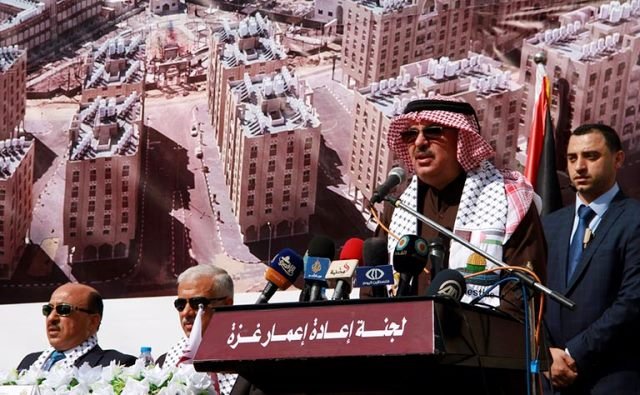 Qatari Committee for the Reconstruction of Gaza in collaboration with the Palestinian Ministry of Public Works and Housing held a ceremony on Saturday to hand over the apartments of the second phase of Sheikh Hamad bin Khalifa Al Thani residential city, Khan Younis, Southern Gaza Strip.

Ceremony was attended by Mohammed Al Emadi, Ambassador & Chairman of Qatari Committee for the Reconstruction of Gaza, Dr. Ismail Haniyeh, former Palestinian Prime Minister, Dr. Mufid al-Hasayneh, Palestinian Minister of Public Works and Housing, Khaled Al Hardan, Deputy Chairman of the Qatari Committee, a number of Palestinian ministers as well as the beneficiaries of the second phase of Hamad City.

Ambassador Mohammed Al Emadi in his address on the occasion hailed the efforts of Emir Sheikh Tamim bin Hamad Al-Thani and Father Emir Sheikh Hamad bin Khalifa Al-Thani in support of the Gaza Strip and the implementation of dozens of vital service and housing projects including Sheikh Hamad City.

He also praised Palestinian President Mahmoud Abbas, Prime Minister of the government of national reconciliation Dr. Rami Hamdallah, Dr. Ismail Haniyeh, and Dr. Mufid al-Hasayneh for their efforts to facilitate the implementation of the Qatari projects in Gaza.

Emadi congratulated the Palestinian families benefiting from the second phase of Hamad bin Khalifa Al-City in Khan Younis, Gaza Strip, which includes 1,264 residential units. He recalled celebration of the Qatari Committee for delivering 1,060 housing units of the first phase of the city, noting that the first and second phases have carried out at a total cost of approximately $ 120 million.

He emphasized that Qatar’s efforts would continue to support the Gaza Strip in particular and Palestine as general. He told that during current visit, Qatari delegation will discuss and find solutions to the current crises in Gaza Strip including electricity crisis, in addition to problems in health, education, housing and infrastructure sectors.