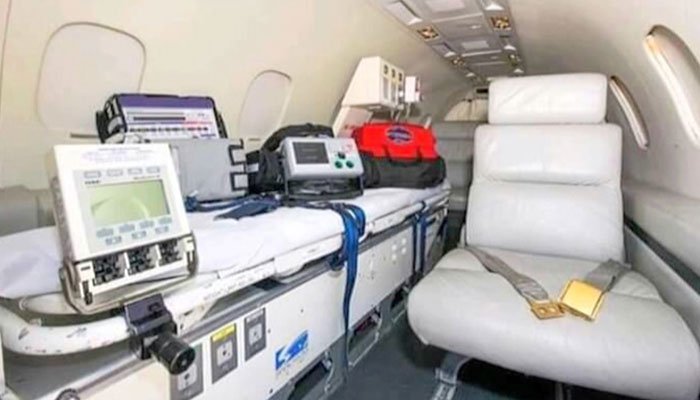 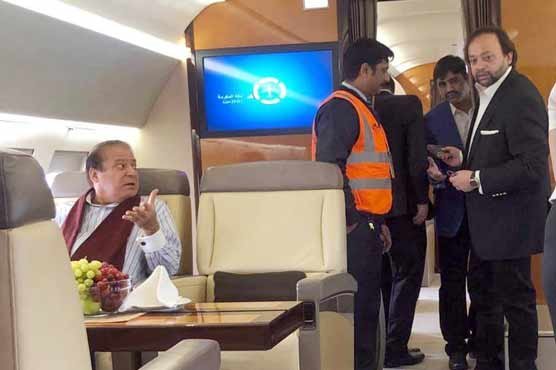 Ailing former prime minister Nawaz Sharif arrived in London on Tuesday evening for his treatment amid bickering between the ruling Pakistan Tehreek-i-Insaf and the opposition Pakistan Muslim League (PML-N) over his departure.

The PML-N supreme leader left his Jati Umra residence in Lahore in the morning for the old airport where an air ambulance from Qatar was waiting to take him to his destination. A good number of PML-N leaders and workers gathered both at his residence and the airport.

They showered flowers on his vehicle and chanted slogans in his favour and against Prime Minister Imran Khan. They were jostling against each other at Jati Umra to take a glimpse of their ailing leader who was clad in a pair of black trousers and a jacket.

Nawaz Sharif’s mother and daughter Maryam saw him off at the residence, while his younger brother Shahbaz Sharif reached Allama Iqbal International Airport ahead of him for immigration. Nawaz Sharif’s personal physician Dr Adnan Khan also accompanied him to London.

The air ambulance landed in Doha for a couple of hours for refuelling and change of air and medical crew before flight to London.

“Before departure doctors examined Nawaz Sharif at Jati Umra and gave him a heavy dose of steroids enabling him to travel abroad,” PML-N spokesperson Marriyum Auranzeb said. Mr Sharif will be taken to Harley Street Clinic for his tests and, if required, he may be shifted to Boston, US, for further treatment.

The three-time prime minister is likely to be taken to Harley Street Clinic on Wednesday (today) for his tests. A special room equipped with emergency medical facilities has been prepared at the apartment of his son Hussain Nawaz, where Dr Adnan will look after him.

“Today Shahbaz Sharif again proved himself to be a sincere and true brother,” Hussain said in a tweet.

Earlier, Shahbaz’s son Suleman, who is absconding in London, gave “full credit” to his father for managing to bring Nawaz Sharif to London.

As the PML-N leaders declared that Nawaz Sharif would return to the country once he got well, some members of Imran Khan’s party mocked his [Nawaz] illness. “Nawaz Sharif should refrain from taking qeema wala naan and khatai,” Punjab minister Fayyazul Hasan Chohan said.

Federal Minister for Science and Technology Fawad Chaudhry taunted the former premier, saying “the way Nawaz climbed the stairs of the air ambulance it seemed he got well after the decision of the court [in his favour]; Sharif should have been treated like any other criminal”.

When asked about the ministers and PM Khan’s statements on Mr Sharif’s illness, PML-N Senator Pervaiz Rashid said: “I can give a befitting reply in a more subtle way to the premier but not today. Mian sahib will return soon after getting well.”

He said Asif Ali Zardari should also get relief as there had been some protocol for former presidents in the world. “Asif Ali Zardari had not done anything wrong in the [last] five years for which he should have been arrested,” he lamented and said Shahid Khaqan Abbasi, Khawaja brothers, Maryam Nawaz and other PML-N leaders had been subjected to vindictive politics.

Asked if Mr Sharif left the country under some deal, Mr Rashid said: “The prime minister said there was no deal.”

Commenting on the prime minister’s Monday speech, PML-N senior leader Khawaja Asif said: “Imran Khan is desperate and frustrated. He is not a horse of a long race.”

In the absence of the PML-N supremo, Shahbaz Sharif, Raja Zafarul Haq and Khawaja Asif have reportedly been tasked with running the party affairs in collaboration with other senior party leaders. “On any policy matter we will take guidance from the party president (Shahbaz Sharif),” PML-N secretary general Ahsan Iqbal said.

According to reports, Qatar Amir Sheikh Tamim Al-Thani sent his chief of protocol inside the aircraft to receive Mr Sharif and take him to Royal Terminal lounge during the stopover in Doha.

Upon arrival in London at 6.30pm, Mr Sharif was greeted at the airport by members of his family who accompanied him home to the family apartment in Avenfield, Park Lane.

According to family sources, Mr Sharif’s UK doctors have been in regular contact with Dr Adnan and have been briefed on his medical condition over the last 10 days.

The return to London was an emotional time for Mr Sharif who is visiting there for the first time after his spouse Begum Kulsoom passed away in Harley Street Clinic last year.

The former premier’s arrival in London comes a day after the interior ministry issued a notification allowing him to travel abroad for medical treatment, saying the decision was an “interim arrangement” in the light of the Lahore High Court order issued last week. In the notification, the ministry reproduced the undertakings provided by the Sharif brothers to the LHC in which the terms of their travel and return have been laid out. The former prime minister’s name remains on the Exit Control List.