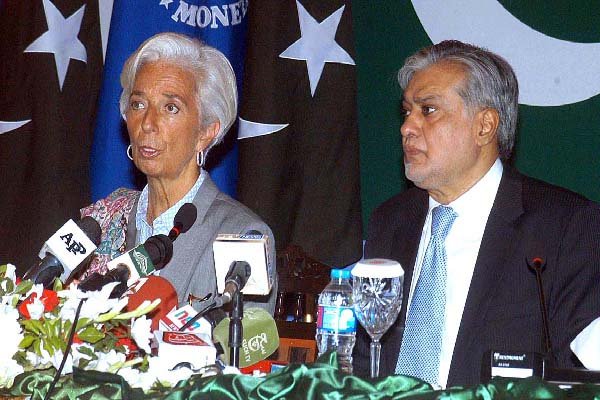 ISLAMABAD, Oct 24 (APP):
Christine Lagarde, IMF Managing Director said hard work and reforms were starting to pay off. “Pakistan, was recently upgraded from a frontier economy to an emerging market in the MSCI index,” she said that it was an important signal given a changing global landscape, especially for emerging and developing economies.

Lagarde was addressing a seminar on “emerging markets in the world economy” organized by State Bank of Pakistan (SBP). She appreciated Pakistan’s economic agenda saying the country was in ‘better fiscal position’ and had the potential to become top emerging economy of the world. IMF chief lauded the government for coping with multiple challenges and achieving macroeconomic stability in a short period of three years.

Lagarde said,”Pakistan is now in a better fiscal position and certainly out of economic crisis.” She said before the present government came into power, Pakistan’s economy was in severe crisis. However, due to the IMF funded programme and owing to the government’s prudent reforms agenda, the country had achieved macroeconomic stability. It successfully completed the three year Extended Fund Facility (EFF) programme with the IMF.

She assured that the IMF would continue to support Pakistan technically in its efforts to make the country on the path of higher economic trajectory.

Due to the economic reforms, she said, Pakistan’s foreign exchange reserves had improved, fiscal deficit had come down and circular debt had reduced significantly, besides increase in tax base and revenue collection.
She stressed the need for promotion of women education and equal job opportunities, besides access to credit and business market which would help boost the country’s economy. “Women are the game changer for Pakistan,” she remarked.

Quoting Quaid-e-Azam Muhammad Ali Jinnah’s saying of ‘Faith, Unity and Discipline’, she said if those principles were followed the country would lead to the path of economic prosperity.

Christine Lagarde said 60 per cent of 180 million population of Pakistan were youth and if their potential was fully exploited the would country would progress tremendously. The IMF Chief said,”This is an important time a moment of opportunity for Pakistan, a country undergoing an economic transformation that can place it well among the ranks of emerging market economies.”

Over the past few years, economic dynamism in the world economy she said, had gradually been shifting from advanced economies to emerging markets. Today, she said, these countries were home to 85 per cent of the world’s population, and account for almost 60 per cent of global GDP up from just under half only a decade ago.
While the global recovery had been subdued, emerging economies have contributed more than 80 percent of global growth since the crisis, she added.

The IMF chief said Pakistan needed to rely on the strength of its own policies to generate more growth and jobs, and to join the group of dynamic emerging markets. Highlighting the world economic scenario, she said that overall, global growth had been too low, for too long, and in many countries had benefitted too few people.

“Our forecasts for world growth are 3.1 per cent this year and 3.4 per cent next year well below the 3.7 percent average for nearly two decades before the 2008 financial crisis,” she added.

Underlying this picture is a complex set of factors, she said in advanced economies, despite signs of recovery in some countries, overall growth prospects remained subdued while many of them were still dealing with crisis legacies high debt, low inflation, and low investment but also higher uncertainty.

Low growth and uncertain prospects were feeding into populist and inward looking attitudes adding “what we see today in many places is that belief in an open global system is being tested”.

She said it was precisely that open economic architecture that had brought so many benefits to the world, especially for emerging and developing economies including Pakistan. “Over the years, we have seen child mortality go down, and life expectancy increase. Absolute poverty has declined, and school enrollment is on the rise. All this is evidence of a broader trend of economic convergence between poorer and richer nations.

“Today, this convergence trend is slowing and the emerging market group will continue to grow at 4.2 per cent this year and 4.6 per cent next year. “The growth advantage over advanced economies is smaller than before.”

The IMF Managing Director said China and India were growing at about 6 7 per cent, while Brazil and Russia were showing signs of improvement after a period of severe contraction.

Low commodity prices, especially oil, have hit commodity exporters hard, and in the Middle East, countries continue to struggle with ongoing conflicts and terrorism, she added. Ms Lagarde said emerging markets were also undergoing transitions of their own shifts that create challenges but also opportunities.

She mentioned about the two things particularly relevant for Pakistan that the first transition was in China while the world’s second largest economy was rebalancing its economy from manufacturing to services, from investment to consumption, and from exports to domestic services. This means a slower but more sustainable growth path, she added. This transition, however, was not without ripple effects especially through trade.

She said China is now among the top ten trading partners for over 100 economies that accounted for about 80 per cent of the world GDP. “It is also Pakistan’s third largest trading partner accounting for close to 20 percent of overall trade. So clearly, a slowing Chinese economy means fewer exports from Pakistan,” she added.

“Yet there is also good news. As China moves up the value added chain, it will reduce its production of some labor intensive goods. This is an opportunity for countries such as Pakistan, but Pakistan will need to re-tool its economy and train its people to realize this advantage,” she added.

Pakistan, she said, “also stands to gain from the second transition the decline in oil and other commodity prices. At the global level, the fall in oil prices created winners and losers. The IMF Chief said income was redistributed from heavy exporters such as Saudi Arabia and Russia to net importers such Pakistan, India, and many others.

In the case of Pakistan, she said a much lower oil import bill drove a marked improvement in the country’s external balances and benefited consumers and businesses. “Still, faced with such a drastic fall in prices and rising financial pressures, many of the commodity exporters had to adjust and growth slowed. This is the case for the GCC countries. As a result, the growth of remittances from GCC countries, which account for nearly two thirds of total such inflows to Pakistan, also slowed”, she observed.