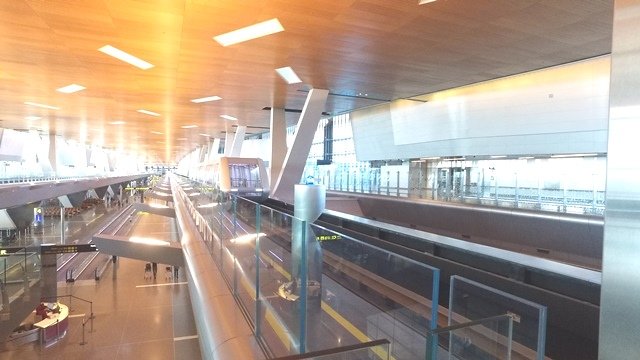 Hamad International Airport (HIA) announced today that its dual Passenger Trains inside the airport terminal will begin operations from the 1st of November 2016.

The Passenger Trains were officially inaugurated by Akbar Al Baker, Qatar Airways Group CEO and Engr. Badr Mohammed Al Meer, Chief Operating Officer of Hamad International Airport in the presence of dignitaries from the Ministry of Transport and Communications and members of the press.

Operation of passenger trains in HIA takes off after issuing of Operational Safety Certificate. The Certificate establishes that HIA has met the railway safety regulation requirements to the satisfaction of the Ministry.

The Ministry has worked with HIA over the last few months through the safety certification process to ensure that HIA, the operator of the Passenger Train achieves compliance with regulations in the State of Qatar, has an effective safety management system and the appropriate competency and capacity to implement safety systems to ensure safe railway operations.

The two Passenger Trains are designed to shuttle between the South and North nodes of the terminal, significantly reducing travel time through the airport for both arriving and departing passengers including Transferring passengers.

Passengers departing from HIA can board from the South station, located behind the iconic Lamp Bear, which will take them towards the North station located near concourses D and E. Passengers arriving at HIA can board the North Station which will take them towards the transfers hall and arrivals immigration located near the South station.

Qatar Airways Group Chief Executive, Akbar Al Baker said: “With the opening of the new Passenger Trains Hamad International Airport passengers will now benefit from an even better experience when travelling through the award-winning HIA. The continued investment in HIA, our home and hub, will ensure that it remains one of the world’s most advanced airports, a destination on its own, and meeting the growing needs of more than 30 million travelers who choose to fly across HIA.”

HIA opened the North Node to operations earlier this year, meeting increasing passenger demand for more flights, making HIA one of the fastest growing international hub airports in the world.

Each Passenger Train has 5 carriages, with the design capacity of 38 persons per carriage which allows each train to transport up to 190 passengers at a time. The two passenger trains will be operated simultaneously in a synchronized manner with the train system remaining operational 24 hours a day. Each trip between the two stations takes 90 seconds, with a 44 second waiting time at each station. Approximate walking time for the same distance is 9 minutes.

Engr. Badr Mohammed Al Meer, Chief Operating Officer, HIA said on the occasion “We are proud to introduce this latest service at our airport with the help and support of the Ministry of Transport and Communications and the New Doha International Airport Steering Committee. This is another step towards our commitment of offering our passengers a seamless and effortless journey through our airport. This new service will also facilitate the smooth handling of the ever increasing passenger numbers at our terminal.”

The Passenger Trains will be operated at a speed of 7 meters per second to ensure the comfort and safety of passengers. To maintain segregation between departing and arriving passengers, designated carriages will be available for each of the factions.

Passengers with reduced mobility have easy access to utilize the facility, with or without an escort. Emotional support animals escorted by owners are also able to use the service. Airport trolleys will not be allowed inside the train.

HIA’s passenger terminal boasts six activity nodes spread across its five concourses, each of which has MAC computer stations, televisions, children’s’ play areas, family waiting areas and quiet rooms with comfortable seating, all offered with no additional charges to its passengers. The airport also offers unlimited complimentary Wi-Fi and is home to art installations by renowned international and local artists, freely available for its passengers’ enjoyment. It also enables passengers to experience a smooth and independent travel experience due to the cutting-edge Smart Airport technology implemented at the airport.

HIA is one of the most efficient airport hub operations in the world, with a 90.5 per cent on-time departure performance for the fiscal year 2016 (April 2015 – March 2016), and handling nearly 20 million bags over the same period with a handling rate of 99 per cent.