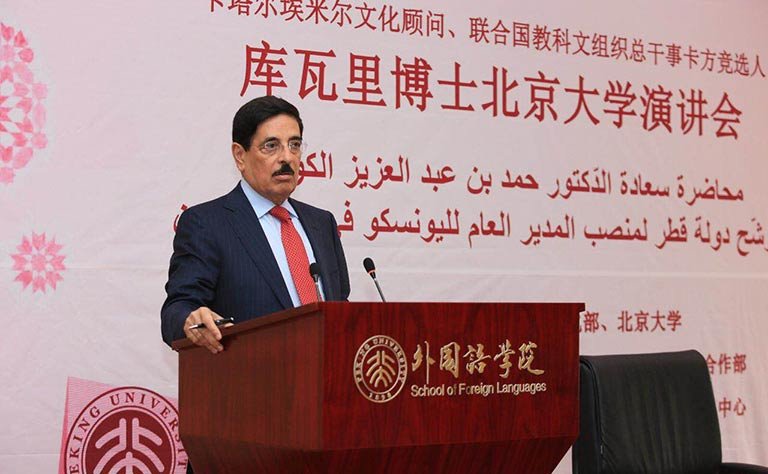 Dr Hamad bin Abdulaziz Al Kuwari, Adviser at the Emiri Diwan and Qatar’s Candidate to the Post of Director-General of the United Nations Educational, Scientific and Cultural Organization (UNESCO) has lauded deep relationship between the Arab and Chinese cultures.

He was addressing at the Peking University (PKU) under the title of “China and the Arabs: The Lesson of Dialogue of Cultures”, Dr. Al Kuwari said the prestigious Peking University is a symbol of the close relationship between China and the Arabs in modern history since the establishment of the Department of Arabic Language and Culture in 1946. Moreover, in 2012, both countries have signed a Memorandum of Understanding (MoU) for Cooperation between Qatar University and PKU in 2012.

Dr. Al Kuwari said that Emir of Qatar Sheikh Tamim bin Hamad Al-Thani has also announced the foundation of Qatar Chair for Middle East Studies at the University of Peking with a grant of 10 million US dollars. Celebrating Qatar-China 2016 Year of Culture witnesses Qatar’s importance towards bilateral relations between the two countries and necessity of inter-relationship between people to people. Present on the occasion were Sultan bin Salmeen AlMansouri, ambassador of Qatar to China along with a number of Arab envoys, officials, academics and students.

Dr. Al Kuwari lauded that the State of Qatar and the People’s Republic of China have strong bilateral relations in various fields and play a joint role in enhancing the dialogue between peoples of the world. Both countries have as well maintained Arab-Chinese relations, which are historical and deeply rooted, he added.

Dr. Hamad Al Kuwari has reviewed the history of cultural exchanges between China and the Arab world, referring to Travelers Ibn Battuta and Wang Dayuan who drew the cultural dialogue road map and have contributed in enriching the Arab and Chinese civilizations alike. He said that “Silk Road” that linked China to the Arab world for more than two thousand years embodies the common inherent heritage between both Chinese and Arab civilizations.

UNESCO added the Great Silk Road” to the World Heritage List due to its historical role in the development of economic and cultural relations the diverse people of the regions, he said. “I believe that China embodies the perfect expression of cultural diversity, whether in its social composition or in its direct relation with Arabs. This diversity and cultural embodiment is what makes the Chinese people more understanding when it comes to the importance of the role of UNESCO at this time in history, especially when it comes to the resolute need to continually expand cultural dialogue between nations for the sake of overall world peace,’ Dr. Al Kuwari said.

There is a general consensus about the fact that UNESCO faces a financial crisis that requires creative solutions and innovative minds in dealing with it, allowing the international organization to achieve outstanding results in education, culture and science, Al Kuwari said, noting that for this reason the slogan of his candidacy campaign is “Towards a New Start”, which implies a breakthrough to regain a renewal of the key principles established by the initial founders of UNESCO.

Dr. Hamad Al Kuwari stressed the importance of culture as an instrument of soft power, renewing his call for the establishment of an International Day of Culture against terrorism.

He also stressed Qatar and China’s strong commitment and experience in the field of education, noting that revitalizing education is one of his main priorities so that UNESCO would continue its efforts in this important field and works towards a future where all technological means are utilized to fight educational decline and create new partnerships among countries along with the best universities in the world.

He said education is “a path towards sustainable development and contributes to providing well-informed citizens the necessary means to overcome the stringent difficulties in their daily life while also helping the political leaders to conduct the right decisions in order to build a resoundingly sustainable world.” Dr. Al Kuwari also stressed the importance of cultural exchange and mutual respect, saying that China has been playing a significant role in perpetuating this path.

In his closing remarks of the lecture, Dr. Al Kuwari called to achieve a new balance in the world based on the mutual respect and understanding of cultures.