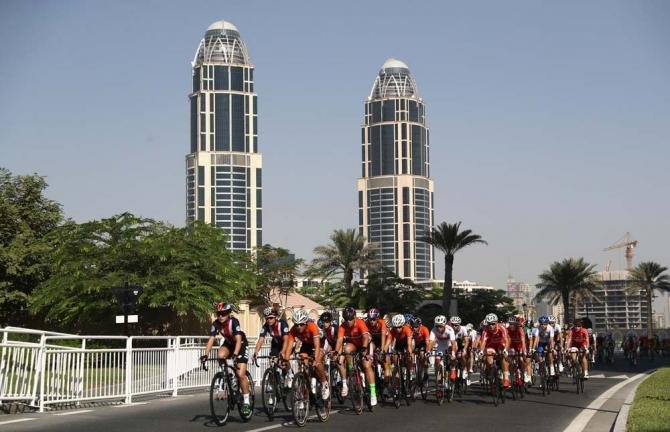 Balsamo, who finished sixth in Richmond last year, capitalised on a strong lead-out from her Italian teammates to beat the USA’s Skylar Schneider on the long drag to the finish line. Susanne Andersen made it another medal for Norway as she sprinted to third place.

The junior women had an early start to the day, setting off at 8:30 local time for four laps of the 15.2km circuit of the Pearl. A big crash in the opening kilometre caught out a lot of riders and set off a mad scramble for new bikes. After seven kilometres, a large group of 28 riders jumped clear but they couldn’t hold it and the peloton came back together by the end of the first lap.

The fast pace made it difficult for anybody to make a successful breakaway bid, while riders were continuously dropped off the back. With two laps to go, what began as an 80-rider peloton was seriously reduced in numbers. More riders tried and failed to snap the elastic as the nations began gearing up for the bunch sprint. Germany and the United States of America did a lot of work on the front.

Going into the last lap, the Italians took to the front, causing the bunch to stretch out around the twisting course. Balsam was brought into the perfect position on the front of the bunch by her teammates. She then kicked hard to move ahead of her rivals. Her advantage was sufficient that she could celebrate several metres before the line, thumping the air with delight.

The gold medal caps off a strong season for Balsamo, who finished second at the junior Gent-Wevelgem, won the junior national title and finished second to Liane Lippert at the European Championships. She is also the current Omnium and team pursuit world champion on the track.

“I’ve got to thank all my teammates, this world title is thanks to all their work, this win is ours, not only mine,” she said after the Italian riders sung the national anthem together with pride. “The whole Italian team deserves this success and lets hope they other riders can do well tomorrow and the day after tomorrow.”

Schneider, who had been a favourite going into the race, edged out Andersen for the silver medal.

“It was a very unique course. The technical aspect was a very big advantage for us,” Schneider explained at the finish. “There were some very strong teams out there who were able to string it out and it was cool to look ahead and see the first rider all the way out there and look behind and see all the way back. In the finish, the Italians did a really great job of stringing it out, their lead-out was very impressive. They were able to deliver their rider first and I was happy to come in second. I gave it everything.”

“I’m very happy with a silver medal. We came with a very strong team so we came with a lot of confidence. I tried to stay under the radar a little bit and tested my legs a bit in the time trial and really analysed the course. I think that played to my advantage today, especially in the last few kilometres. I’m really happy to win a medal for USA and silver is a nice colour.”