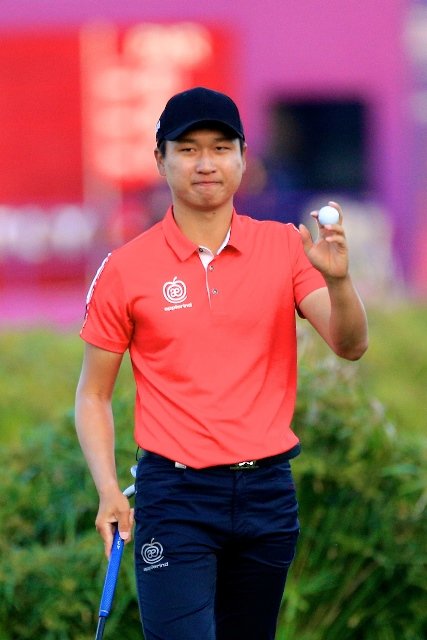 Wang, 21, carded a five-under-par 67 at Doha Golf Club to join playing partner Kiradech and seven others in a share of the lead at eight-under. The nine-way tie matched the European Tour record for most players tied for a lead, set in the first round of the 2007 Wales Open.

Despite narrowly missing a birdie putt on 18, Wang – the youngest player in last year’s Olympic Men’s Golf Tournament – was in an upbeat mood as the 2016 European Tour Rookie of the Year shone on his tournament debut.

“I’ve never seen nine players tied for the lead – and I really tried to make a birdie on the last,” laughed Wang, who broke through on the European Tour with back-to-back wins in Morocco and Mauritius last May.

“I was close to holing the putt, but I still have the third and final round to go so I feel okay. I feel confident. This is a big chance to win. I like the course and the wind conditions, and I think I have a really good chance right now.”

Wang is paired with South African Jaco Van Zyl for the third round after playing two rounds with Kiradech and Australian Scott Hend, the 2016 Asian Tour Order of Merit winner.

“I was so happy to play with my friends. I think it helped me to shoot eight-under over the first two days,” said Wang, who’s not worried about the possibility of the wind blowing up at the weekend.

“Actually, I hope it’s going to be windier. I don’t know why I’m good in the wind, but I think my distance control in the wind is good so I think I have a good chance to win.”

Kiradech, a three-time European Tour winner, opened with a 66 but fell back on Friday after bogeys at one and six before the burly 27-year-old bounced back on the back nine with birdies at 10, 12, 16 and 17.

“I had a lot of birdie chances on the front nine, but I just couldn’t make it, so the key was to make the first birdie on 10. For some reason, the ball just wasn’t going in and I was two-over, then the birdie on 10 changed the momentum,” said Kiradech, who’s in a rich vein of form after a tie for fourth in Abu Dhabi last week.

“It’s a great honour to be among the Asian players at the top with Wang. We had a lot of fun today and talked a lot. He’s a good friend, a nice guy and a great player. It was so nice for both of us to finish well.

“I’m confident going into the weekend as I’ve been striking the ball well, rolling the putts and recovering well, so I just need to keep doing what I’m doing. Who knows, on Sunday, at the end of the day, it might be my day.”

First held in 1998, the Commercial Bank Qatar Masters has helped establish Qatar as a world-class sporting venue and is considered the country’s annual ‘must-attend’ sporting and social event. Sitting at the heart of the European Tour’s Middle East swing, the tournament attracted over 25,000 spectators in 2016 and was broadcast to a global TV audience of over 400 million.

Entry is free for children under 14 years of age. For those looking for an extra-special experience with the best views of the course and an exclusive culinary experience hospitality packages are now available to purchase through the tournament’s official website qatar-masters.com/hospitality.